Playing Megaman Legends 2 felt like what the first should have been. Megaman moves with the analog stick now and doesn’t have to stop in place to shoot. This fix changes everything. When I would get overwhelmed in the first Megaman Legends, it was because Megaman had to be planted to the ground to fight back. Combat was still occasionally difficult, with the inclusion of status effects like burning or energy sink taking a massive toil, but it felt manageable. The improved camera also helped avoid a problem from the first game,  where Megaman would get knocked down by something off-screen, like getting hit by a sniper in a FPS and spending a full minute trying to figure out where they are shooting from. I used the homing missiles for every boss because they were honestly busted. In general, Megaman Legends 2’s was just easier to mechanically exploit.

A classmate of mine in third grade and I argued that data was pronounced as da-tuh instead of day-tuh, to our teacher, because of this game.

Megaman Legends 2’s plot tends to sideline most of its new characters to the end, but the globetrotting middle is better paced than the first’s weird start and abrupt stop. Thanks Megaman Legends, I love how the game’s sole  city consisting of a factory district t only exists as a place where wild dogs attack Megaman. Pokte Village has the game’s first big dungeon, and it stands out as another instance of how the Bonne’s on the surface are a  goofy and lovable family of pirates but are literally terrorists. Similar to the homes and public buildings of the first game, Tron Bonne destroys most of Pokte Village during her boss fight (with a really good scene where Tron tries to convince Megman to join her by breaking the fourth wall and calling out Roll’s expensive weapon upgrades  and how Roll must be skimping off the top). Megaman can pay to rebuild the city like last time by talking with the village’s quiz master mayor, but I didn’t know  I would be locked out of donating if I completed her nerve-wrecking 100-question quiz. Now Pokte Village residents will never have homes! 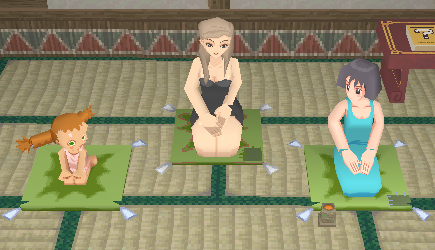 The 100 question quiz was nerve wrecking on a level only comparable to the final boss.

I tend to prefer sequel games in general. They might not hit the high points of the original, but they often smooth out the annoyances. Bayonetta 2 is superior to the original Bayonetta because Bayonetta starts the game with the almost mandatory Panther Within run, Jeanne is playable right after beating the game instead of having to platinum all the previous stages, and those terrible bullet time water puzzles from the first game are completely gone. No More Heroes 2 is superior to the original No More Heroes because the odd jobs aren’t mandatory (yes, the jobs were supposed to be tedious and taxing, but that’s a point that only needs to be made once or twice, not ten times) and Travis’s room can be decorated to show overall progress in the story. These two games, like Megaman Legends 2, feel rushed in the last third and have something missing from their originals, but I consider  the removal of tedious parts of a game often equal overall enjoyment of a game. Later on,  Bayonetta and No More Heroes did receive third entries, but not Megaman Legends 2, which ends on a poetic but abrupt cliff-hanger. Only Megaman Legends 3 can save Megaman from where he is stranded, on the moon, but not far, from our hearts.