Video game soundtracks never fail to amaze me with how varied they’ve been able to become in recent years. Touching on everything from heavy synth chords, ominous symphonic choirs, powerful classical tones, and urgent electronic suites, the diversity in sound is endless. Nonetheless, I had an overly-specific query regarding video game soundtracks: what about soundtracks for fake games? Finding Equip’s Synthetic Core 88 (which I discuss more in detail later) set me off on a bizarre quest to find concept albums themed around this idea. This was harder to find than expected, but I figured this idea was too cool to not discuss anyway, so I’ll go on what I was able to find. 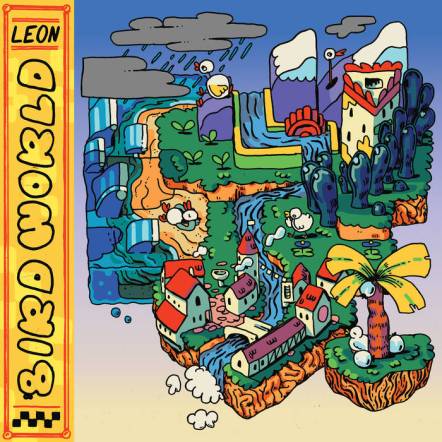 The first album I’ll showcase is bird world by Leon Chang. While I mostly associate Chang with his wonderful regular twitter posts reminding everyone to play Star Ocean: The Second Story, his music work is a different (but neat) creature of the feathered variety.
bird world is the soundtrack to a cute tiny bird-themed RPG about an avian fellow named Leon (ha) who sets out on an adventure after meeting with a mysterious, amnesiac stranger. Chang even went as far as to include a little illustrated PDF with the album download that harkens back to the good old days of video games including physical manuals with little blurbs about the settings and characters. He even includes gameplay tips and level-up skills for the characters! That’s dedication, folks!

The best way to describe bird world is damn catchy. bird world feels like an unrestrained love letter to thematic video game sub-levels with a heavy smattering of indulgent sampling ranging from Ape Escape monkey sneezing to the Metal Gear alert sound. The result is a varied, upbeat mix of music that lands straight into the realm of embodying the game’s worlds themselves. Off the bat, the relaxing main menu theme and quirky welcome to bird world song quickly plop you into the grasp of the ‘game’, right after you’ve torn off the plastic wrap. From the tropical and floaty notes of lychee beach to the mellow and cozy side of winter melon valley, Chang does an exceptional job giving each track a specific flair. My personal favorite track, noodle cave, blankets you in fast-paced beats that get you pumped as the end of the ‘game’ approaches.

My only complaint with bird world is the soundtrack’s overall form, which, while fun and amazing to listen to, doesn’t quite feel like an actual soundtrack. If anything, bird world feels like a remixed version of an already existing soundtrack, though I’m not sure if Chang was trying to evoke a specific era of video games or a console. By no means is this a bad thing, and I don’t think Chang was purposely trying to evoke an older-sounding soundtrack by using something like older recording technology or chip-tune music. Just be aware that bird world is its own distinctive beast that tries more to evoke the general structure of a video game soundtrack.

The next album of interest is Synthetic Core 88 by Equip. I found this piece through Yetee thanks to Drew Wise’s eye-catching cover art for the vinyl and cassettes, which are stylized after Japanese soundtrack packaging and even include fake screencaps for the ‘game’. Like bird world, Synthetic Core 88 is conceptualized as an RPG soundtrack, this time centered around a girl named Flora getting lost in a dreary post-apocalyptic future world and fighting for survival. Synthetic Core 88 takes heavy cues from SNES-era games, with Chrono Trigger and Final Fantasy VI being obvious influences, yet Equip manages to give the soundtrack a distinctive, smooth flair. 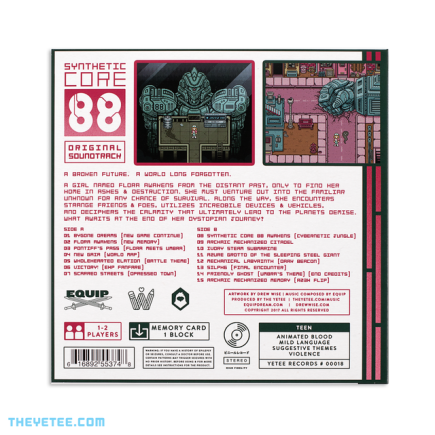 As Equip states on their bandcamp page, vaporwave and new age sounds are a major influential factor within their work, and it shows. While Synthetic Core 88 embodies a lot of respect towards old-school RPG’s, there’s still a sense of unique mellowness that Equip manages to incorporate in many of the tracks, such as in ‘New GAIA’ and ‘Flora Awakens’. Even the more upbeat tracks such as ‘Wholehearted Elation’ and ‘SILPH6’ evoke feelings of urgency mixed with a certain distance. There’s a strong sense of dreaminess tinged with nostalgia that permeates many of the tracks.

While I wish it was easier to find more ‘fake videogame soundtrack’ concept albums, I was pleased with both bird world and Synthetic Core 88. Both albums’ artists manage to take the concepts in different directions, resulting in some cool and catchy musical work that harken back to various flavors of video game sounds. It’s definitely a neat concept that I’d love to see grow as time goes on.