END_OF_DOCUMENT_TOKEN_TO_BE_REPLACED

I want to start this article by doing something out of the ordinary for me, which is discussing current video game news. When news of the 3DS remake of the 3rd Generation Pokemon games Ruby and Sapphire dropped, the first thing my friends and I got excited about was what the secret bases would look like running off  Pokemon X and Y’s visuals. A refresher for those of you reading who skipped those Hoenn adventures of which I feel are the second weakest of the Pokemon Gens (after Gen Four if we are only counting non-remakes, because Heart Gold and Soul Silver were fantastic). Hoenn’s secret bases were located in trees, bushes, and sides of mountains where a player with a Pokémon who knew the move Secret Power could access large hidden rooms.

The only real draw the secret bases had were that they could be decorated with various furnishing like cushions and desks made of leaves to trinkets like Pokémon plush and ornaments like breakable doors, tents, and slides. This has me thinking about how, in general, getting a house or base to interior decorate is one of my favorite added parts in video games (up there with character customization like outfits and hair styles). 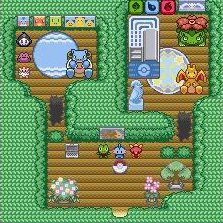 You can tell that this is a fan mod image because it was impossible to walk across those ditches. Let alone transport all that plush.

Some games make the player’s base or house an integral part of game progression and the Lost In Blue games on the DS are the first to come to mind. 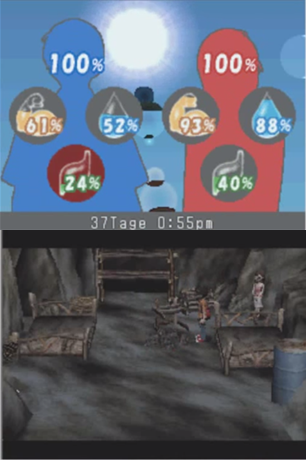 The Lost In Blue games were spiritual successors to the Game Boy Color series Survival Kids, where the player controls a young kid who ends up as a castaway on a deserted tropical island. The first Lost In Blue was an early DS game for me back around 2006, a bygone time where you could actually find a reasonable copy of Trace Memory. While the original first Survival Kids fostered you with late 90’s card-battle anime protagonists Ken and Mery and their mascot ready pet monkey, the first Lost In Blue assigns you the serious young man Keith and the near-sighted quiet young woman Skye. The goal, learn to live off the land and build a way off the island. Every day has you controlling Keith in finding food and water for the pair, as Skye stays in the cave and preps food.

The cave base as a core concept is great, as building new beds and better fireplaces not only spiffs up the joint, but also either makes the daily progress easier or helps restore Keith and Skye’s stamina and overall well-being. You even get to decorate the place with a nifty barrel so that you can keep water inside so these two young youth don’t die of thirst.

Ah the life of a bachelor. A time where you don’t care about the random liquor bottles by the entrance or if you have enough shelves for your miscellaneous boxes.