What makes horror so great is its heavy marriage to visuals. Glutton looks like a piece of furniture come to life, but the sole fact that it does not actually go out of its way to impose Heather removes even the hint of animalistic tendencies. The stationary truth and lie gatekeepers from Labyrinth have more agency and humanity. Glutton shows that Silent Hill’s use of inactive creatures and set pieces can be far scarier than any stalking monster.

Starting with a quick example from Silent Hill 2 is Pyramid Head’s initial appearance in the Blue Creek Apartments. It makes sense that Pyramid Head is scary, he’s got a big cleaver and he will swing it at James. He’s mobile and big. He can cause a game over almost immediately. But personally, when Pyramid Head is at his most scary is when he is quiet, during a totally skippable, initial appearance in the apartment hallway. The premise of just getting to stand and stare at Pyramid Head’s weird body illuminated in red light is when Silent Hill really grasps that horror-as-visuals conceit.

Silent Hill 3 has a Pyramid Head parallel in Valtiel, a humanoid that exists to both assist but also terrify Heather. Valtiel is never fought or even talked to directly but is in the background of many events of Silent Hill 3. For instance, anytime Heather dies in the game, Valtiel moves her body somewhere. More akin to that childhood friend who was just around to torture bugs but with a name plate that reads “Heather’s Guardian”, Valtiel is a moving Francis Bacon (a reported heavy influence on the Silent Hill games) art set piece. Whether it’s harassing a Silent Hill Nurse, casually crawling through a tight space, or whatever the hell this is?

Once Valtiel’s presence is fully known, it does not feel like a helping hand supporting Heather. It just feels like a bored employee with a torture side-hustle. Silent Hill 3 loves implementing other creepy set pieces. The first time Heather arrives in the main mall area with the massive scouting Closer enemies is scary because they are huge, and they feel like end game monsters even though the game just started. But that has nothing on the Monster in the Locker. Like Glutton, the Monster in the Locker does not attack Heather and simply twitches and struggles to get free, restrained in its burlap sack. Burlap sacks are prime scary territory, because like the best horror, its mystery mixed with pity allows the viewer’s imagination to fill in the details. Scariest scene in Takeshi Miike’s Audition? The body bag scene. Scariest part of Resident Evil 4, excluding the Iron Maiden’s creepy voice? The body bag monster.

No Silent Hill game unintentionally captures this premise of “the static monster or set piece is way scarier than the actual harmful monsters” than Silent Hill 4: The Room. The monsters in Silent Hill 4 are more goofy than frightening, including the burping hospital patients (I am already aware the discourse about how the noises might be a cultural barrier that people just missed, but I do not care), the rubber testicle monkeys, and the infamous sentient killer wheelchairs. Silent Hill 4: The Room does have its own designated horror set piece galleries.

Halfway through the game, protagonists Henry and Eileen are tasked with escaping St. Jerome’s Hospital. On the second floor is a long hallway filled with many doors. While the previously mentioned killer wheelchairs menace the hallway, way scarier things hide behind the doors. Each new playthrough randomizes the twelve rooms, with only one or two needing to be visited to continue the game. Each room’s scare or fright potential ping-pongs between wall on the ceiling death traps to just actual enemies. One even contains Eileen’s enlarged head, and its eyes follow Henry as he walks around the room. But the real creep shows are rooms like one with the removed skin on hooks, the tangling body from the ceiling, and my favorite, the tarp room. 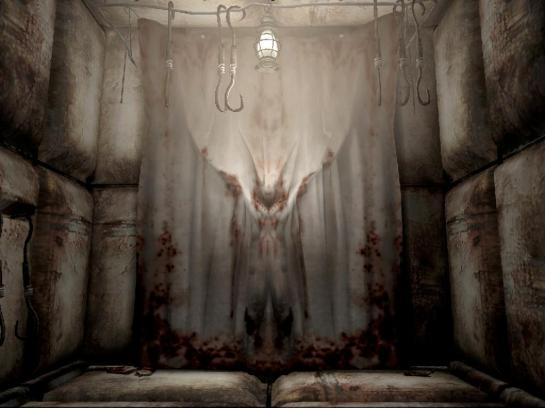 Like the earlier point about the way body bags are unnerving because they allow the player to stumble upon bad things and create their own narratives, so too does the best St. Jerome’s Hospital rooms. Unspeakable misery was enacted in these rooms and you just happened to show up to late for the party.

The Spiral Staircase just needed to serve a gameplay function, this momentary safe zone connecting different areas in the game’s escort mission second half. Instead, it’s a gallery of morbid diagrams and surreal imagery. Just like with Glutton, the game’s lighting and fog effects half hid the object assets, but seen up close, they are amazing.

Just look at this stuff.

By the time the player reaches these areas, they are just rushing through the game to the finish, but all this work was put into areas that the player spends maybe less than ten minutes in total.

When I was a kid, I got a hold of my dad’s CD of Aerosmith’s Nine Lives. I was instantly freaked out by the weird imagery artist Stefan Sagmeister drew in the album’s lyric book. Images of singer Steven Tyler getting stabbed in the leg with a stick with a baby’s face on the end or a worm coming out of a cat’s eye stuck with me. So, too does Silent Hill’s best static imagery stick with me. Nothing made disturbing not simply by the cheap shock of excessive gore or bodily fluids. It shows how the parts of Silent Hill that cannot harm you might be far worse than the things that can.