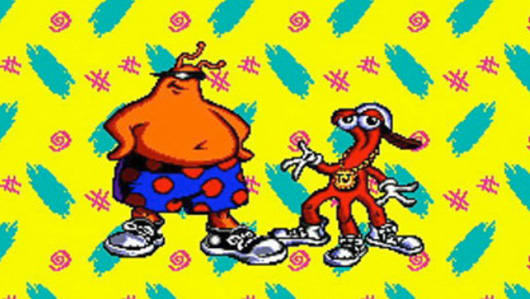 While Burning Rangers uses hip-hop lyrics to hype up a group, the lyrics in the Wii’s Mad World are all about “me, myself, and I”. Mad World’s Death Watch contestants, willing participants in a highly televised pay-per-view murder fest, often rap about personally taking on Jack Cayman, the love child of Gears of War’s Marcus Phoenix and Hellboy’s Hellboy. Most of the subject matter centers on pure intimidation, featured in rapper Sick YG’s track  It’s a Mad World: “Attack on sight – Red, Black, White./ Is all that is needed. Delivering a beating.” These lyrics specifically  reference the game’s purposely limited color pallet. Sick YG goes further in Ain’t that Funny, actually naming Jack in “Jack, Jack, he’s a psychomaniac/ That’s right, he’s death on sight/ It don’t matter who’s wrong or right!”. The contestants on Death Watch love attending  as heard in the lyrics “You die, I get paid/ More cash surrounding this game./ It’s crazy, I get more money by killing these goons,/ now, ain’t that funny?” In other words, some of the contestants even find humor in the debauched contest. It’s as if the level’s end boss is rapping directly from the last part of the stage.

With the final bad guy, The Black Baron, this conceit might be literal. Sick YG’s theme for The Black Baron, Look Pimpin, has this perfect part, “I strike first! Don’t hesitate/ To populate the murder rate!/ You just sealed your fate/ On the holidays that’ll be one less plate”. That last part about a future holiday meal has this perfectly innocuous conclusion that feels like The Black Baron himself meant it to sound far more threatening than unintentionally goofy. An interpretation is that this final fight involves Jack Cayman simply being uninvited to Thanksgiving dinner with The Black Baron and his Tron: Legacy-looking assistant Mathilda. The comedic tonal whiplash makes more sense with how The Black Baron’s future jovial personality (now called Blacker Baron to make up for how he sort-of died at the end of Mad World), acts in the game’s spiritual sequel Anarchy Reigns.

Speaking of Anarchy Reigns, developer Platinum Games’ proto-Overwatch that never made it big (even with the inclusion of Bayonetta as DLC and the coolest START menu of any game ever), also has some great music. Anarchy Reigns’s fighting game rooster of characters all have themes, some even working as lyrical resumes. This vocal promotion is directly referenced in Big Bull’s theme Over In A Flash by Sicky G, with the lyrics “Some just chitter chat. I ain’t really into that./ I just like to counteract./ On the point of the attack./ Check my resume it can happen any day.”.

Over In A Flash tries to look tough in order to survive living in Anarchy Reign’s terrible post-apocalyptic city Altambra. Contrasted against Mad World’s pageantry and showmanship, the people in Anarchy Reigns are simply trying to make  a living as assassins and bruisers. Rapper Tre- Dot’s Ruthless and its lyrics “Stepping over bodies full of virus and cancers./ I’m immune to it. Bathe in it, gaze in it,/ get a rush from it” tries to put a stern face on  reality and a city that people can grow sick of both figuratively and literally. The track continues with “Mutated creatures to destroy is/ the purpose,/ I used to love this city/ Now I spit on its surface”. The lyrics’ frequent reference to mutants might be a metaphor for society itself…or the  Killer Croc-esque from Batman enemies called Mutants who show up in multiplayer. Who can tell? On a lighter note, Ox’s song Lights Out has a part that goes “See while you were sleeping I been out here beasting.” and that feels like something I should say at least once a week.

Finally, the most important Sega hip-hop anything; Knuckles’ theme song UNKNOWN FROM M.E. by Marlon Saunders and Hunnid-P from Sonic Adventure. Jokes about lyrics like “You can call me Knuckles,/ unlike Sonic I don’t chuckle” aside, UNKNOWN FROM M.E. is this charming anthem that makes Knuckles come off as absolutely ridiculous but potentially cool. Every discussion of Knuckles should start with the question “did you know that ‘Knuckles can break them down whether they’re solid or frail’?” The song’s meme legacy might easily overshadow anything else in this article, but its worth a listen.

In more serious matters are the spooky location music from Sonic Adventure 2. Unwritten rules dictate that Knuckles must refer to the level he’s  in by name, even if said place is giving him the creeps. Pumpkin Hill’s theme, A Ghost’s Pumpkin Soup, by Hunnid-P employs this pleasant mood with lyrics like “A ghost tried to approach me and got leery,/ asked him a question and he vanished in a second”. It’s an effective and weird horror hip-hop song, reminiscent of the CYNE track Enter Killmore. Now Enter Killmore is focused on the titular Frankenstein’s monster  Agent Killmore, described as “Super sickly, scientifically modified/ test tube fortified”. Hunnid-P’s fanciful lyrics about Knuckles being harassed by actual ghosts echoes CYNE’s scary myth retellings of Agent Killmore, heard in the lines “Shoots lasers out his mouth, severing the head/ Anything and anybody in the path is super dead” or how he looks like a “walking gun with teeth.” Killmore sounds dangerous, but what if a place just did not like you and was actively working against you?

In less dread-inducing locales, there’s Aquatic Mine’s perfectly named theme Dive Into The Mellow. Now Hunnid-P continues the spooky imagery from A Ghost’s Pumpkin Soup with “I’m seeing skulls that burn, they try to cut me off”, but that is not the real point of Dive Into the Mellow. The song feels like Knuckles is floating in a pool but having anxiety about the Chaos Emeralds/his life: “Let’s take a dive, in Aquatic Mine/ Once was a coal pit, but now it’s a water ride/ Makes you want to sit back, enjoy the life”. Aquatic Mine is in the middle of Sonic Adventure 2’s plot and honestly Knuckles just wants to hide and relax, which is rather relatable.

Go listen to some Sega hip-hop!