A specific struggle I’ve had over the past few years getting immersed with rhythm games is finding others who are as invested in the games’ aesthetics as they are in gameplay and track selection. Since rhythm games are skill-focused like fighting games, I suppose the focus on scores and ability should be expected, but I feel this does a disservice to the games themselves especially when certain rhythm games go out of their way to be more distinctive. Some of the more ‘hardcore’ rhythm games, like Beatmania or DJMax have some aesthetic UI attempts (I’m not talking solely about song selection art, by the way), but they mostly seem to be window dressings to catch the eyes of would-be players. I’m also not specifically referring to the ‘weirder’ end of rhythm games like Gitaroo Man or Gal Metal, which push for more general eccentricity, but games like my ever-favored IA/VT Colorful and the Taiko no Tatsujin series which aim for a fun aesthetic design AND challenging gameplay. One company that hits a strong aesthetic design point is Rayark, a Taiwanese game development studio formed in 2011. 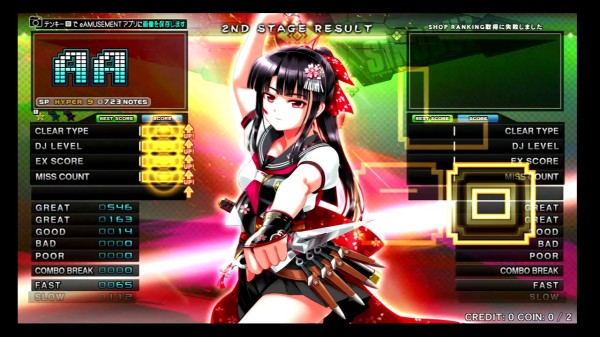 Ninja waifus are cool and all, but that’s not really why you’re playing Beatmania, right?

Rayark primarily focuses on app games, though they’ve also dabbled in PC game development, and, more recently, a few of their apps have gotten ‘definitive edition’ releases on home consoles such as the Nintendo Switch and PS4. While Rayark seems to be best known for their rhythm games, they’ve dabbled in other genres including pixel side-scrolling platformer, waifu-gacha RPG, and plant mascot-raising sim. Based on info and photos from their website, Rayark has grown enough as a company to host annual conventions and even has a themed cafe based on their games.

But getting to the actual point of this article: Rayark’s rhythm games. So far Rayark has four rhythm games: Cytus and its sequel Cytus II, Deemo, and Voez. While all of Rayark’s games started as F2P app games, the first Cytus, Deemo, and Voez were re-released on various portable and home consoles with their song packs included AND future updates to add additional song packs.

Disclaimer: I’ve dabbled briefly with the original F2P version of Cytus, and have yet to play the Switch-enhanced version Cytus α. I’ve also only played the ‘base’ version of Cytus II (i.e., have not attempted to bankrupt myself with all the in-game purchases) so my experiences with these games are limited compared to the others. Also note that my screencaps are from Cytus II.

Cytus and its sequel are both sci-fi-flavored rhythm games with different executions. The original Cytus was framed around an apocalyptic future of Earth wherein humanity died off and memories of humans are stored in musical nodes accessed by robots. Cytus II, on the other hand, has more of a cyberpunk feel within a heavily populated virtual world called ‘Cytus’ and focuses on the conflicts and relationships between various characters. While OG Cytus slowly unfolded its story through sparse cutscenes, Cytus II utilizes message boards where fictional news updates and chats between characters take place.

And appropriately the message boards come with (fake) comments of varying intelligence.

With the meat of many rhythm games focusing on electronic and techno music, it’s a shame many of them don’t attempt to really dig their heels into the sci-fi aesthetic (Hatsune Miku notwithstanding, and speaking of her, she does show up in Cytus II). Cytus and Cytus II show that using the sci-fi theme is not only doable but manages to utilize it in two different ways (though some glances at information online tells that the individual games are not as separate from each other as they seem…). I especially enjoy the rather monotone design palette in conjunction with the robotic imagery used for the Cytus α remake which contrasts with the neon colors used so heavily within Cytus II. Cytus II also ups the ante with its gorgeous song select screens, which adds to the already lovingly detailed song art.

The song selection screens are also animated by the way. And yes, Neko’s looks like a Nico Nico Douga stream.

Deemo
Deemo is a piano-themed rhythm game with, surprise surprise, tracks with heavy focus on piano instrumentals. The game’s rather somber story is themed around a young girl named Alice falling from a window in the sky into a dwelling occupied by a friendly shadow creature named Deemo and an aloof masked lady. In order to help Alice return to the window, Deemo plays the piano inside the dwelling which gradually grows a giant tree as the player completes tracks. The non-rhythm game parts of Deemo are framed as a point-and-click lite game, as the player can explore Deemo’s dwelling, interacting with objects to find new tracks and explore the mysterious surroundings.

Masked lady might be snarky but she’s pretty harmless, I promise.

While the story of Deemo isn’t particularly long and encourages replays to unlock songs (the re-releases of the game speed up the tree-growing progress to the point where I finished a single playthrough of the Switch version in just four hours), the bittersweet narrative apparently resonated with enough people to warrant a full-on upcoming movie adaptation, as well as a 3D PS4 VR port. The art style in Deemo is very distinctive, evoking a sort of child’s fairy tale feel in the narrative cutscenes, the design of Deemo’s dwelling, and my personal favorite, the song selection art. All the song art is focused on Alice, Deemo, or the masked lady in some form. Many of the additional song packs also feature different guest artists illustrating the characters in different ways.

The rhythm game duality of “the song slaps but completely destroys me to actually play”.

Voez
In contrast to the apocalyptic sci-fi/cyberpunk drama of the Cytus games and the mellow exploration of Deemo, Voez is more upbeat and contemporary. Framed around a slice-of-life story focused on some Taiwanese high schoolers, the low-key story is told through journal entries and text messages passed between the characters and progressed by completing increasingly harder song challenges.

No, they really are Taiwanese, I assure you. The Western names are just a fluke.

While Voez wasn’t quite as impactful story-wise as the Cytus games or Deemo, it lives and breathes a far more laidback air. I would liken the game’s aesthetic to a perpetual summer vacation, focused on the nostalgia of being with old friends. Noticeably, the game is absolutely obsessed with diamond patterns in both the gameplay beat symbols and the UI. On top of this, everything is quite colorful and upbeat, even when you occasionally hit songs that are more serious or dour. It’s amazing to me that, while Voez is a bit more understated compared to Rayark’s other rhythm games, it still manages to maintain its own identity.

Tangentially related, but Euchaeta is a fantastic band and if you enjoy the two tracks they have in this game I strongly encourage checking out their albums.

Overall, I feel Rayark is a great example of how a developer can spin a specific game genre in different ways without feeling redundant or tired Their rhythm games are executed distinctively, and the aesthetic design plays a significant aspect in giving each game its own identity. I do hope that even the more hardcore rhythm games could push a little harder for distinctive aesthetic designs, but I doubt that will ever be the case.