Perhaps the most maligned main Tales of game, which happens to be one of my favorites, is Tales of the Abyss. Abyss gets a ton of my praise for being the only Tales of game to have a full bad guy team that act as an evil parallel  to the heroes. Similar to my desire for a Mario and Luigi Super Star Saga but with Wario and Waluigi, I feel there is untapped potential in a Tale of the Abyss: Inverse where you play as the badass God-Generals like Dist the Rose, Largo the Black Lion, and that one loli girl no one likes. Speaking of characters no one likes, Tales of the Abyss protagonist Luke fon Fabre serves as the naïve and sheltered player surrogate for the big world around him. This means every time a character gets annoyed that they have to explain an otherwise simple aspect of their world or Luke says something dumb, it goes back onto you, the player. Controlling a protagonist in a video game does not always involve playing a personality-free blank slate, but playing a character with the capacity to piss off other game character doesn’t feel great either.

RPGs with parties, or really any video game with some kind of crew or squad, run the potential risk of having protagonists whose character flaws boil down to “anything I do pisses everyone off”. I call this “dogpiling”. This can be divided up into two different camps: the protagonist is a person with predefined thoughts and interests or is the previous referenced personality-free blank slate that can only exposit player input. Video game protagonists already struggle to have a range of different archetypes, so having an outlined character who does something imperfect should be valuable, as it makes them less cookie-cutter. It can often feel like a punishment. 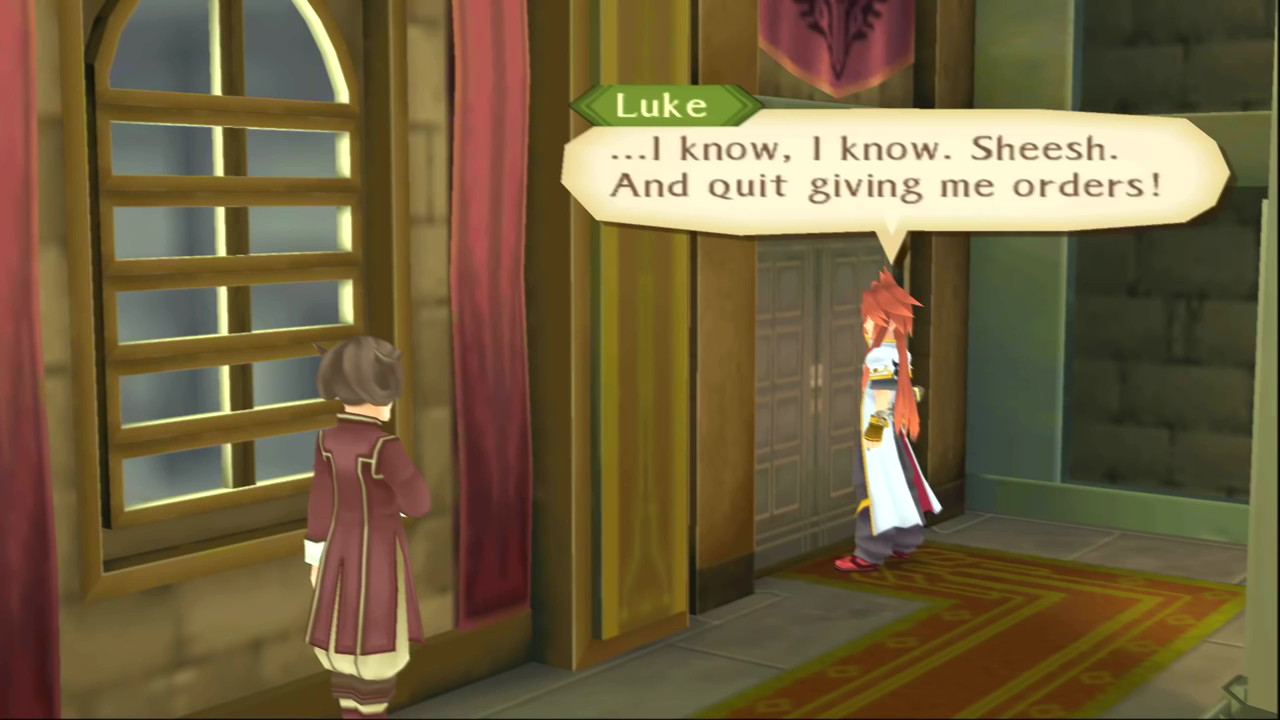 A great summary of the first four hours of Tales of the Abyss.

Luke fon Fabre is what I like to call a “Yosuke”, in reference to Persona 4’s dirt-bag Yosuke Hanamura (while Persona 3’s Junpei and Persona 5’s Ryuji also fit this bill, Yosuke is king). A Yosuke is any video game character, usually a guy, who must act as the receptacle for all the other characters’ annoyance or aggravation. He’s the punching bag, the lightning rod of hate, the perpetually kicked in the gut. The Yosuke is often there for humorous reasons, but often it means creating a character that, even when he’s not being an ass, cannot get a word in edgewise without negative consequences. It also means that no other character can be incorrect in a similar way. Because of  Luke’s very sheltered and often crass opinions on the world, he becomes a Yosuke. Luke is the protagonist, and thus gets to undertake more plot controlling actions, so you also get to be the one playing him when he screws up. And boy does he screw up hard. 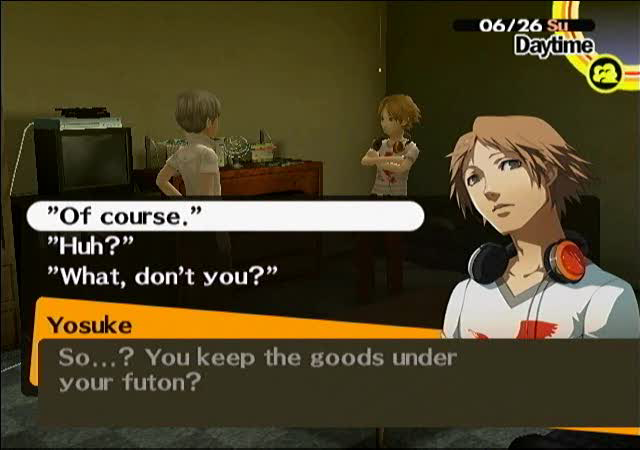 No spoilers will be given to Luke’s massive misfire, as it is far into Tales of the Abyss’s plot. Bullet Storm’s Grayson Hunts’ big mistake is front and center. The plot of Bullet Storm is pauses dramatically “What if Gears of Wars’ Delta One was led by Cole Train instead of Marcus Fenix? Then, Cole  got Marcus and Dom killed at the beginning by accidently crushing them with an exploding barge, and  Baird spent the next 3 hours just fucken dogging him for being a dangerous dumbass?”. See, this parallel between Gears of Wars and Bullet Storm exists because Bullet Storm was made by Pain Killer developer People Can Fly, who ported the original Gears to PC and also helped develop 2 and 3. Hunt and company are basically alternate universe Gears characters, barrel-chest proportions and all, although with the narrative sense to call out Hunt’s devil-may-care attitude when he finally gets someone hurt.

The most interesting part of Bullet Storm is that People Can Fly made a game extensively calling out the morals of the much larger game they had been working on. Yet, at the end of the day, I still had to play as Grayson getting chewed out by last remaining crew member Ishi Sato. Whenever Sato made a quip about their friend’s deaths while shooting bandits, I felt genuinely bad the first few times. Honestly, it was a pretty unique emotion to a shooter to actually feel consequences for blowing up a big set piece. Yet after a while, I started to distance myself from Grayson’s dumb idea. I want to play as a protagonist who does not have all their edges sanded off, though being blamed for something I had no say in can only go so far before it just turns into brow beating. Similar to some people’s take about how some video games chide you for doing something you cannot control. Like how The Last of Us 2 made you kill a dog seemingly so to make you feel bad for killing said dog. 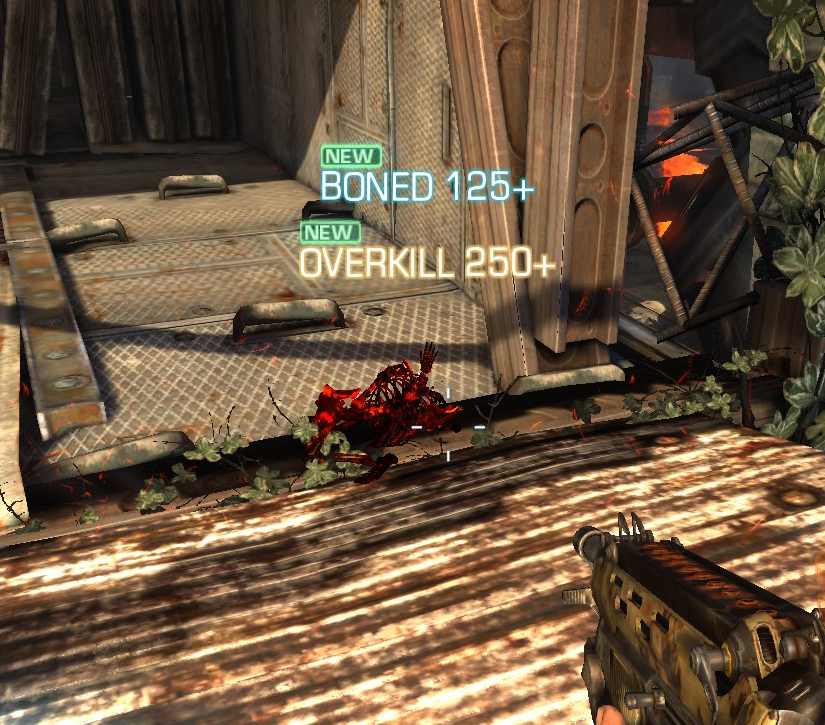 Depth and pathos from a game people only remember for it’s lewd kill combos. Which sucks because people should have at least remembered it for having a Battle Royal bomb collar gun.

Star Wars: Knights of the Old Republic was the first game I played that had that good/evil binary mechanic that games got thankfully tired of, excluding the Infamous games. I think one of the reasons I love Kylo Ren is that he’s a live action version of what my edgy middle schooler felt was the best person to be in KOTOR. I honestly just wanted force lightening, which meant I had to be a bad guy. Problem was, this meant KOTOR’s resident boy scout Carth and resident apple polisher Bastila were on me for everything I did. Be a little rough interrogating a person, get a lecture. Use a red lightsaber, get a lecture. Give someone a lecture, get a lecture.

A big story beat happens at the end of the second to last planet where all your party members decide to continue based on your player actions. Because most of your party aren’t  giant jackasses, (outside of giant jackass Canderous Ordo) most of my party just bailed. A realistic approach compared to what I’ve heard of Renegade runs in Bioware’s later game, Mass Effect, where everyone just has to tolerate your piss-baby specism. It still stung to have characters I spent time with and respect tell me that I’m terrible. I felt less like a badass and more just a bad person. A whole conversation can be made about the way morality systems in games often run against an attempted narrative, like how killing a NPC means you just locked yourself out of that part of the game. Yes, you can do go against social norms and conventions, though should you seems to have been gamified away into being impractical. Maybe the difference is that being able to choose to be an asshole really is different from just doing something and everyone thinks you are an asshole for doing it. For someone like me, that usually just means I’m not going to choose to be an asshole. 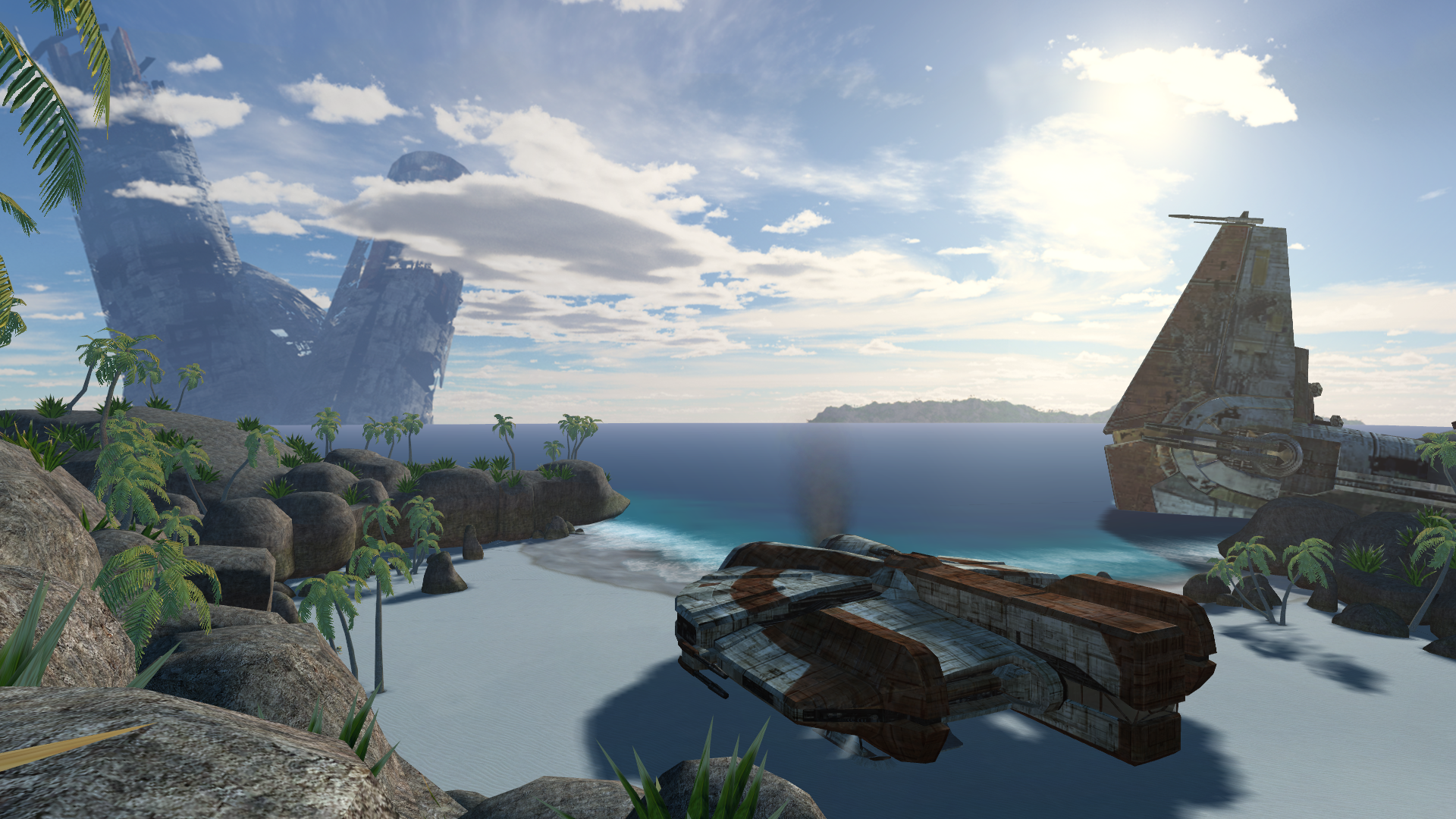 Hopefully this high res desktop background someone made will help us forget how bad KOTOR has visibly aged.

In an old Iwata Asks interview (discussed here by Siliconera), Tales of producer Makoto Yoshizumi discusses how he does not feel that Tales of games are RPGs because you are playing a character. That distinction is why he decided to write Luke as unlikable, because the player could grow to appreciate his character growth. That is a respectful approach, though in a way akin to a creator confirming the outlandish thing they created was satire, thus letting you call it satire. Over time, replaying Tales of the Abyss and discussing with people who initially found Luke to be a rather empathetic tragic character, adds a richness that is often missing from other Tales of games. But going from watching Luke get dogpiled to my defense of Luke meant I, the player, was still getting dogpiled. I don’t have an answer to this problem, but it is something to think about.