West of Loathing was originally released in 2017, by developer Asymmetric Publications. It is a spinoff of long-running web browser MMORPG Kingdom of Loathing, and maintains similar mechanics, terminology, and stick figure visuals from. A DLC scenario, Reckonin’ at Gun Manor, was released in 2019, and a follow-up game themed around a Lovecraftian setting was released without prior announcement in November 2022.

West of Loathing follows the adventures of the player-created protagonist, who can take the role of a Cow Puncher, Beanflinger, or Snake Oiler (fighter, mage, and ranger, respectively). After leaving their mundane family life behind, the protagonist journeys their way west, with the thriving town of Frisco as their destination. After first traveling to Boring Springs, the player picks up a horse for traveling and a pardner to assist in combat, before heading to a larger region divided by the mountains. Along the way, the protagonist tangles with demonic cows, evil rodeo clowns, mysterious alien technology, necromancy, cultists, and ghost bureaucracy.

Monster Crown was developed by Studio Aurum, an independent development team composed of lead developer Jason Walsh and designer/writer Shad Schwarck, along with their music team. According to the game’s Kickstarter, Monster Crown was a project developed in their free time in early 2016, before being Kickstarted in 2018, and finally released in 2020.

In a world where monsters and humans coexist, Monster Crown places the player in the shoes of a bright 14-year-old, living in the countryside with their parents. After helping their Dad with some errands, and showing promise as a budding monster tamer in the process, the player receives a starter monster from a magazine personality quiz. New friend in tow, the player sets out to befriend more monsters and travel across the continent.

END_OF_DOCUMENT_TOKEN_TO_BE_REPLACED

Recently, I finished playing Tokyo Mirage Sessions (or TMS), the hybrid love child born from Nintendo’s Fire Emblem and Atlus’ Megami Tensei. Atlus is mostly known nowadays for its flagship series Shin Megami Tensei (or SMT, look familiar to anyone?) and it’s sister Persona. I had a very good time with TMS,  so it saddens me that it seems to be so overlooked, partly perhaps because of the Wii U’s lack of popularity. What stuck out while playing  TMS is its remarkable ability  at using the entire playable cast, something of an unfortunate rarity in RPGs. I will be breaking down what I feel are the major reasons for this success.

Tokyo Mirage Sessions is successful at creating a gameplay loop that encourages using all  party members evenly and in a balanced way, as well as making them all contribute meaningfully in battle even while not being directly controlled. This ability is mainly  a result of two elements: the session system and the character’s stage rank. The first is the session system, used in battle when exploiting enemy weaknesses to create attack chains. With the session system, a character can strike an enemy’s weakness and if an ally knows a session skill that can follow up on the original attack’s element or weapon, they will execute it immediately. Another ally can then start a third attack if they have a skill to trigger from the second attack. For example, if Tsubasa hits an enemy weak to lances, Itsuki can then utilize lance-slash, from which Touma can now use sword-blaze to finish the chain. Additionally this mechanic creates a sense that the group is fighting as a team and as friends, rather than alone in a group as most RPG battles often play out. 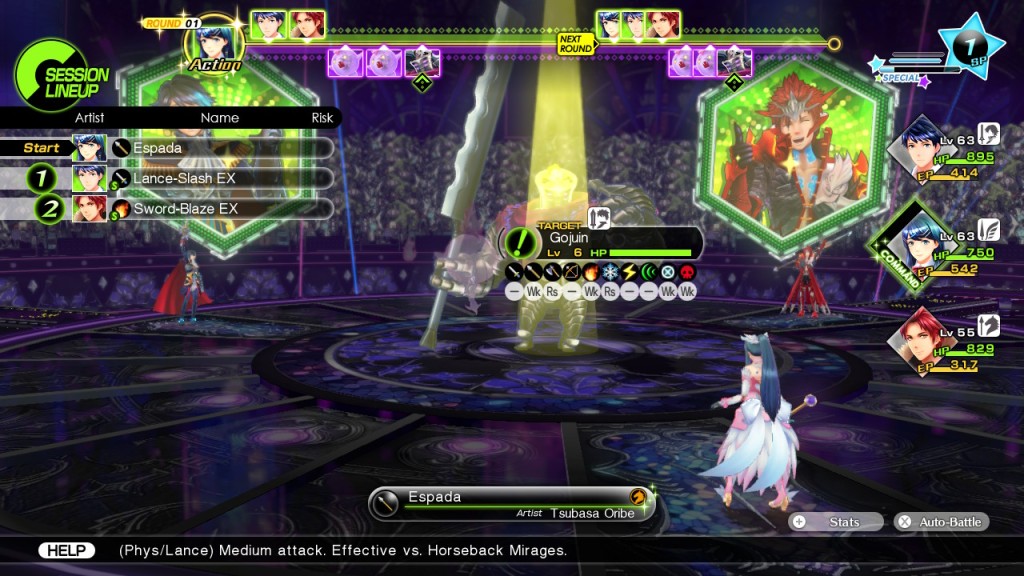