Not many logistics group hire a pocky-eating wolf girl and a pie-obsessed angel.

On and off over the years, I’ve made occasional attempts to get into a variety of gacha games, but nothing’s really stuck. Typically, I get easily frustrated with these types of games, as their difficulty plateaus and meta-imbalances, designed to leech money out of players, tends to be inscrutable for me. I also follow a lot of the criticisms marked at these games, of the smarmy “who would pay hundreds of dollars for a JPEG image of a waifu that can be taken away from you if the game shuts down?” variety. Around mid-2020, I decided to make another attempt at gacha games, starting with Tales of Crestoria and Sinoalice. I was remarkably disappointed by Sinoalice, after being personally excited for the game’s release for over a year as a massive Yoko Taro fan. The game has a great soundtrack and art direction but it’s also an absolute snooze fest to play. I’ve still been following Tales of Crestoria since launch and will openly admit I dislike playing the game. I never got the chance to play Tales of the Rays before Bamco shuttered the English release, so I’m stuck with a super boring turn-based Tales of title. I dislike the gameplay to the point of always letting the game’s barely optimal auto-battle work for me. I mostly stick with the game because of the surprisingly good story and game-original cast, particularly the murderous love interest Misella and self-aware edgelord hedonist Vicious. I also started playing Princess Connect Re: Dive (which I…like? I don’t have a strong opinion on it), and I’m eagerly awaiting the English release for Touken Ranbu.

Amidst this mess of gacha game attempts and questionable usage of free time, I also got into Arknights around the end of 2020. I didn’t really start “seriously” playing the game until January of this year, but the game managed to subsume the better part of my free time, for good reason. 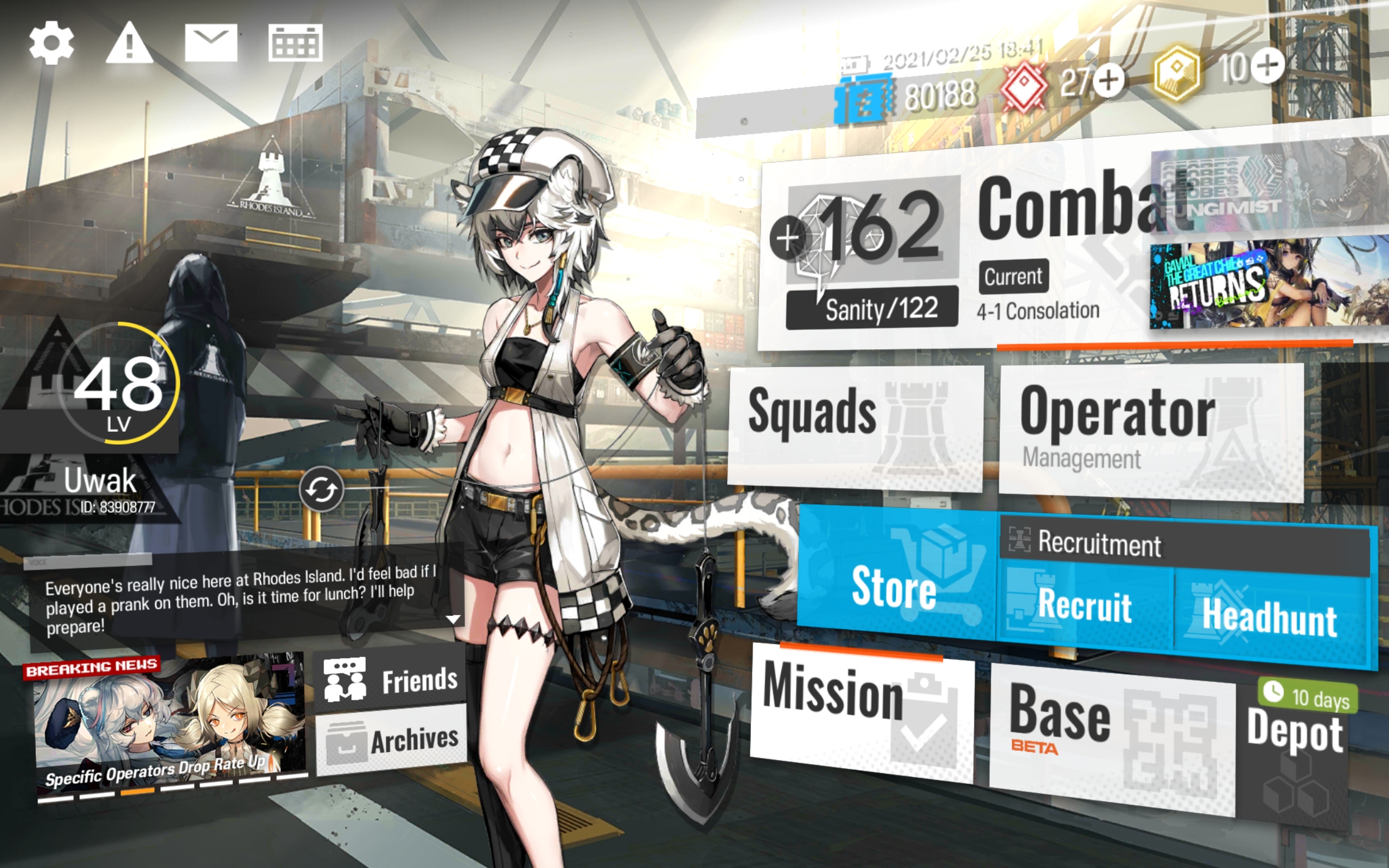 Whoever designed the UI deserves a raise, honestly.

Arknights is a strategy tower defense mobile game, originally created by Chinese developers Hypergryph and Studio Montagne, and the game’s English release came out in 2020. The game has very extensive lore, and mostly revolves around its dystopian sci-fi setting about a pharmaceutical company trying to help individuals infected with a particular fatal disease and fighting against antagonistic forces that want to wreak chaos. Also, everyone in the game is a stylish animal or demon or angel person who takes up some particular job class.

I’m definitely underselling the game, but somehow all these aspects come together to make something that’s surprisingly fun. I haven’t really engaged with tower defense games since my middle school days playing flash games, and my only experience with SRPG’s is limited to Utawareumono and less than a handful of Fire Emblem games. So why do I like Arknights? I still haven’t pinpointed the exact reason, but I’ve can think of a few things. 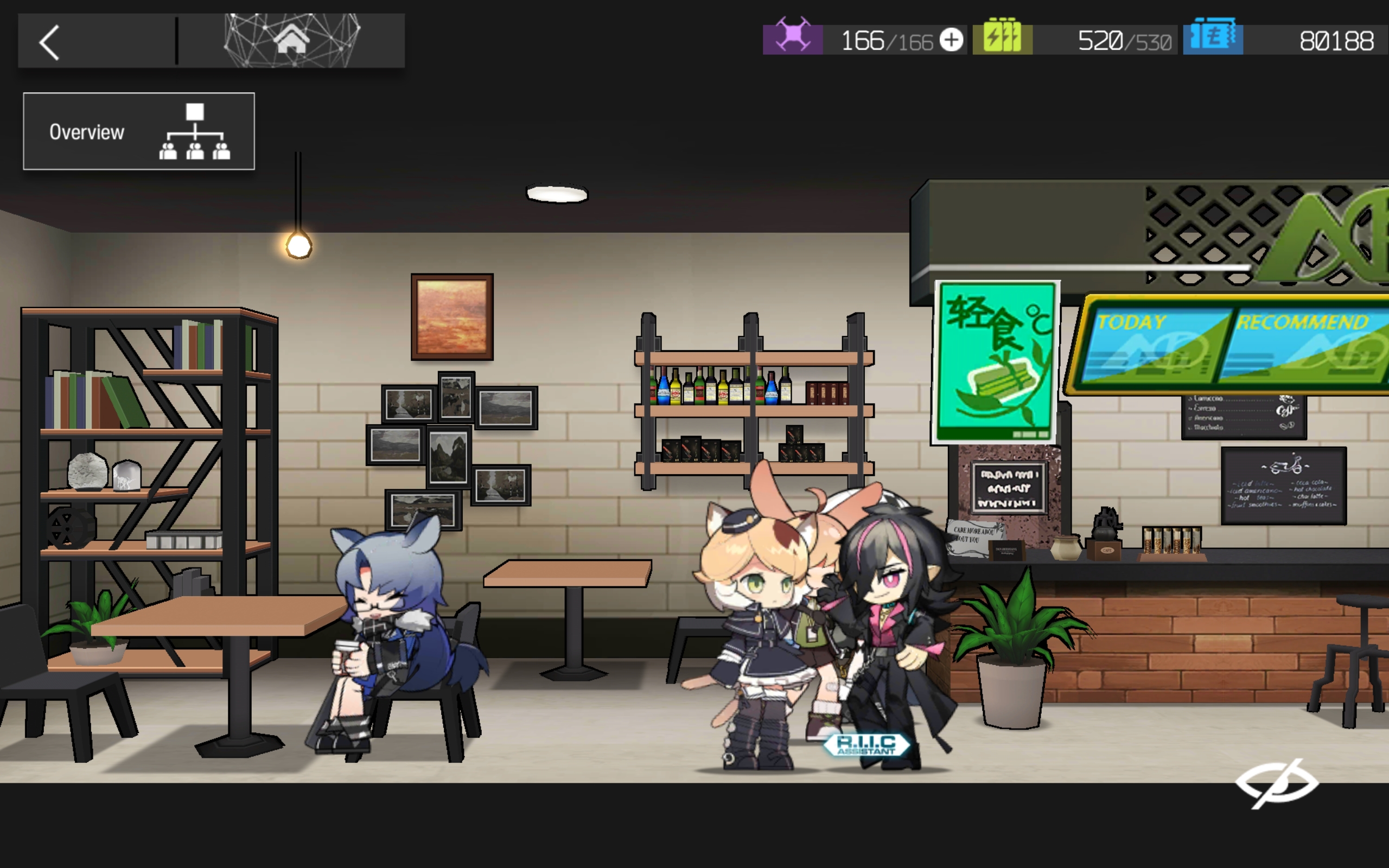 A nice place for a latte after a day of working at the mercenary factory.

One thing that really got my attention with Arknights is its art direction. “Sci-fi game occupied by anime animal people” probably doesn’t bring exceptional things to mind, but somehow Arknights nails the designs. There’s a heavy influence from urban street fashion (in both the legitimately nice and borderline absurd/silly varieties) combined with mercenary, vaguely cyber-punk military garb for character fashion. Sure, you can have characters in goofier getups, like the obligatory Summer swimsuits or Halloween costumes. There’s just something genuinely refreshing about the game having an actual sense of style instead of the goofier otaku cash-grab games that put everyone in generic or skimpy fantasy wear.

Aesthetics aside, Arknights is also genuinely fun to play. The game has a lot of tutorials off the bat, mostly to get you acquainted with the various character classes, powers, and terrain shenanigans. It can be a bit overwhelming at first, but once things start clicking, the game starts to feel really satisfying. The game encourages trial-and-error, and you’re allowed to practice stages before doing an actual run that burns sanity, the game’s equivalent to a timed stamina system. Sometimes, I’ve had exceptionally frustrating runs trying to beat levels perfectly, and having things go wrong because a single unit is in the wrong place or mistiming placement. That being said, there’s a specific satisfaction to completing a level perfectly and watching my units chew through enemies. 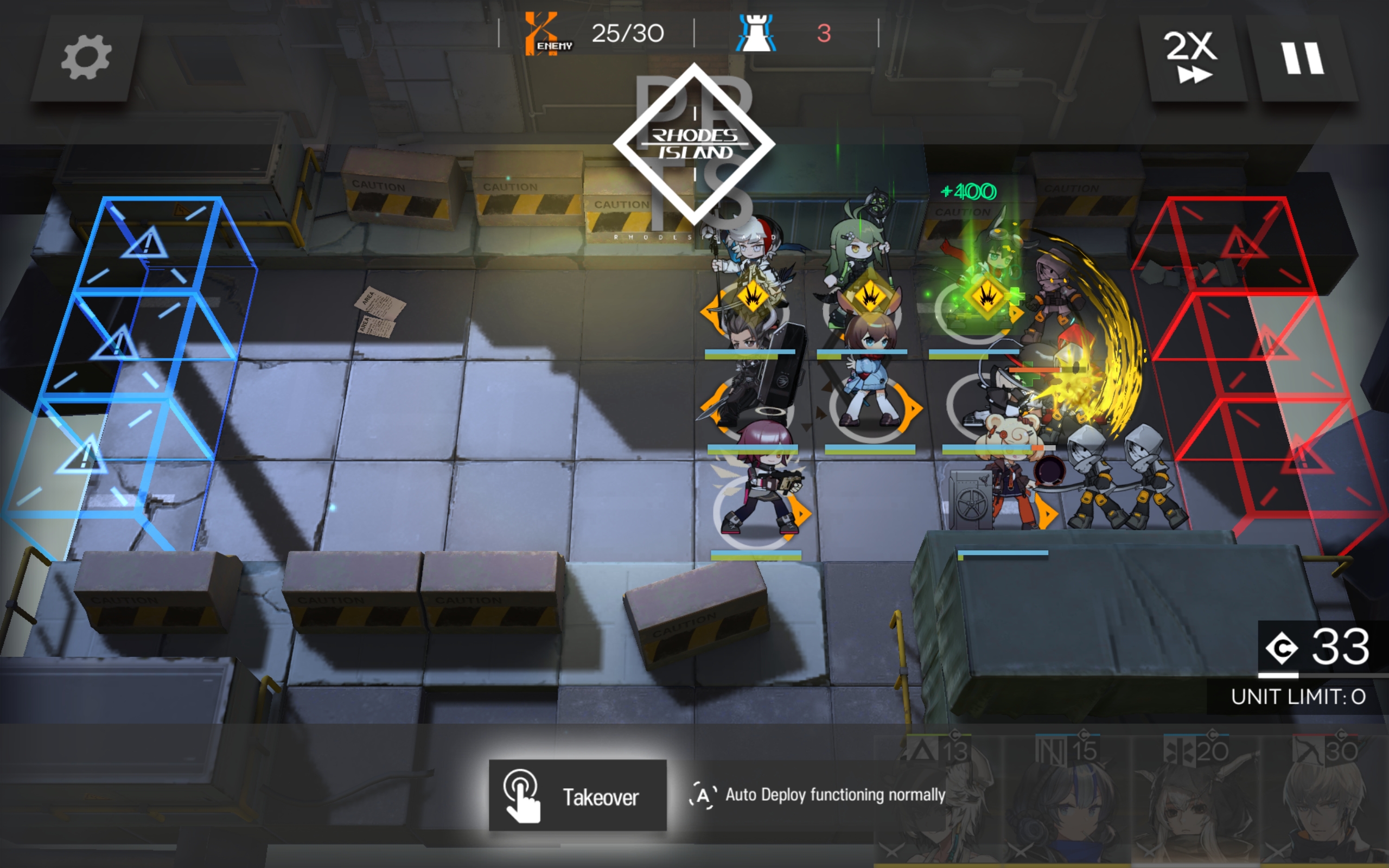 Slowly building up my army of units has also been enjoyable in its own way. While Arknights still has meta character tiers, there’s less of an issue with overall powercreep, since the game doesn’t have a PvP mode (not that I’d know you’d implement one in this type of game?) and some seemingly genuine effort by the developers. The closest thing Arknights has is a raid mode that I don’t really engage with, but it’s there for extra challenge and presumably more need for meta stuff. Back to the character tier stuff, while higher rarity characters tend to be more powerful, the game is still balanced in a way to ensure high rarity characters aren’t a be-all end-all means to steamroll stages, since strategy tends to matter more. In other words, lower rarity characters are still valuable, and some can be surprisingly useful. It’s to the point where many YouTube walkthrough deliberately play stages with lower rarity characters to provide more flexibility with strategies. I’ve noticed more recent gacha games from the past few years are starting to shift over to this kind of rarity scaling (even the gacha behemoth Fate/Grand Order does this), which is a welcomed change.

Personally, I haven’t felt compelled to spend money for the sake of pulling specific characters from the gacha yet, though the game apparently offers pity rates for higher rarity characters after pulling a certain number of times. The game does guarantee higher rarity characters within the first 10 pulls when banners are instated, and I’ve managed to collect a good assortment of characters this way. The game encourages flexibility and characters within the same job classes tend to operate differently and have varied skills. For example, the angelic Exusiai and Executor are both sniper operators. However, Exusiai is a fast sharpshooter who excels at picking off weaker and faster enemies, while Executor’s slower shotgun AoE attacks are better utilized at chokepoints to wear down higher-defense enemies. Pulling for new characters feels more like seeing what tools I can add to my existing toolbox and what new strategies I can formulate around these characters.

A good starfish, who also ate all my gacha draw luck.

The base management is another aspect of Arknights that I like for whatever reason. Admittedly, from a wider context, the base is just another thing I have to grind resources for in the background, but the constant forward momentum, along with the progress of leveling up my main squadrons, just feels satisfying. The base is mostly used to produce different flavors of resources, and also serves as an ant farm where characters can be assigned to work different jobs. Maybe the feeling that the base is still working towards something without me having to engage in the core tower defense gameplay directly or indirectly is why I enjoy this building.

There are some issues I do take with parts of the game. For one, I don’t understand how a game with exceptional good UI design that exists to make things easily accessible doesn’t also have a “receive all” button for the missions section. I’d like to save a few button clicks, is all. I’d also prefer an outright skip function instead of having the game autoplay completed stages for me. This is mostly after watching some RNG issues screw up a few autoplay runs, and again, saving some time. Also, admittedly, I’m not especially far in the game as of this writing, but I’ve been through some stages that have some overtly tight strategies to the point where it’s more annoying than satisfying, and apparently this only gets worse as the game progresses. Also, while I find the game’s setting and lore interesting, the story’s expression through its cutscenes is…obnoxious. Part of this might be a translation issue, but I don’t particularly enjoy the stilted character dialogue and the story cutscenes undercutting a lot of the game’s pacing. Oddly, Princess Connect Re: Dive handles this better, as that game’s story cutscenes can be viewed separately (and on one’s own time) from the actual game stages.

Admittedly, I might still be in a weird honeymoon period with Arknights, but that hasn’t stopped me from planning my work lunch breaks around resource grinding and getting my base affairs organized. Even if I crap out on Arknights before the end of this year, I still want to give this game credit for having more meat on its bones than most other gacha games I’ve played.