System Shock 2 is one of my favorite games. This late 90’s PC game, is a mix of low-key cyberpunk and the alright movie Event Horizon. It further combines survival-based combat with a focus on RPG style skill trees and paths created its own distinct subgenre of video game, often labeled “System Shock 2 like”. Dracula’s castle from Castlevania: Symphonia of the Night was metroidvania’s mother (father…adopted gay mom?), and System Shock 2’s spooky mega-corporation owned space ship, the Von Braun, create an iconic setting within a subgenre it unintentionally created. What sets apart, and realistically limits the amount of games given the moniker “System Shock 2-like” compared to the relatively swamped subgenre of metroidvanias is, a necessary bigger budget. Additionally, these game require an almost constant reliance on utilizing some of the original System Shock 2 staff. As if metroidvanias like Hollow Knight, Dust: An Elysian Tail, and Quacamelee! would have to invite Castlevania’s real life Dracula, creative director Koji Igarashi, to consult on each game as a show of authenticity.

“System Shock 2-likes” feel as if they have at least one big hand print of System Shock 2, like a Urah-kai’s mark of Saruman, over the design document. The legacy of System Shock 2 is so impactful, that even a later game like Void Bastards is marketed front and center with the tag line “from the development director of System Shock 2 and Bioshock”. This shared creative staff creates an odd familiarity for these games set, sometimes only partially, in isolated abandoned research facilities, including Bioshock 1 and 2, Prey (2017), and the distant cousin Soma.

Active exploration is big in “System Shock 2-likes”, where certain key areas are returned to over and over. Prey protagonist Morgan Yu’s office being refitted into a home base comes to mind, similar to the frequent backtracking in metroidvanias. That compulsive need to open every drawer, filing cabinet, or bathroom stall, common in story-focused walking simulators like Gone Home, is encouraged. It’s rather amusing that a subgenre of games so fixated on creative methods for dispatching grotesque monsters or armor-plated robots feels best when every enemy is simply ignored because you are only returning to Engineering because you just remembered there was a hidden unopened safe. Screw progressing the overarching plot to find answers as to why the research facility is abandon and why everyone is dead. You have audio logs detailing how much Margret in Hydroponics dislikes Brendon from Neuromod Division because his last White Elephant gift was something shitty, like an expensive bag of whiskey stones. Soma’s safe mode even removes all direct combat with its instant death undersea monstrosities, letting the player scatter papers and coffee cups in relative peace.

The solo journey of the “System Shock 2-like” is great for providing a creepy atmosphere, where often the only non-monster met are recently-deceased crewmate set pieces. Explore a lab in System Shock 2, find a hanged researcher. Explore a train corridor in Soma, find a technician being barely kept alive by a respirator AI. Go literally anywhere in Prey, find a staff member dried of their energy by the Typhon so they now look like a tar-covered mummy. It invokes this great feeling, like in the original Alien, that while you are scurrying to  survive, creatures bigger and scarier than you are also keeping busy. 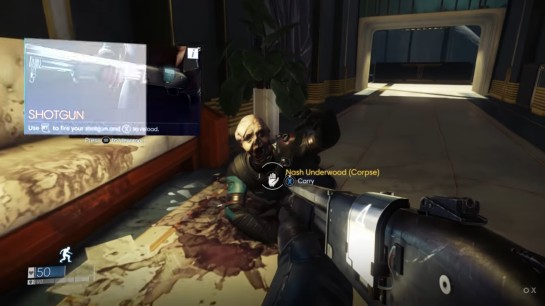 Compulsive exploring is also rewarded with health and skill points. Feeding that lizard brain need to see the skill tree expand, sparingly placed skill modules or permanent weapon and armor upgrades allow for a freedom to customize one’s own combat and survival. I personally like to stick with melee damage and hacking, as hallmarks of the subgenre are low ammo, unfriendly security drones, and key-card locked offices. I also don’t prioritize most of the fantastical energy powers in “System Shock 2-likes”. Psionics from System Shock 2 are too finicky and require a lot of time investment to become practical, plasmids from Bioshock are cool looking but are more useful for environmental puzzles than combat, and I felt like I solely turned into a piece of office equipment in Prey to get into tight passages and doorways than hide from monsters. But these systems exist so someone, not always myself, will use them.

There exists frequently-used environments in “System Shock 2-likes”. These games usually feature an engineering floor, a shuttle bay, a medical wing, and usually something solely dedicated to each game’s science fiction specific space aspect/ the reason everyone on board is dead or soon to be dead. While most suffer from being indistinguishable collections of gray storage rooms and lab equipment, with the occasionally pleasant green Hydroponics floor, none are my favorite. No, the places I really like seeing are ones that are the most passive and human, like the crew quarters which includes cafeterias and recreation.

Crew quarters often show up half way through any given game, which is great because by this point many of the research facility staff have either been talking to you over some kind of intercom, presented themselves through audio logs, or showed up in person as a dead body with a plot progressing space thing-a-ma-jig. You know their names and faces and now you can know their personal spaces. Some of the best environmental story telling can be found in crew quarters, like Soma’s deuteragonist Dr. Catherine Chun’s room with her creepy half-robot stuffed animal and the paper fan that reminds Dr. Chun of her homeland of Taiwan. This detective-esque investigation, while more the focus in games like Analogue: A Hate Story, can be an interesting secondary task to flush out these abandoned worlds.

Cafeterias are probably the most telling parts of the average world of a “System Shock 2-like”, especially in how they relate to what the crew finds reasonable to eat/what the game considers the most practical health item. Looting trash cans and mailboxes so you could gorge yourself to peak health with packaged pastries and chips was a funny “oh videogames, you crazy” moment in Bioshock, but that came from System Shock 2 filling every cabinet and shelf with junk food. Some crew members have it better than others. Prey’s item crafting and recycling system puts an extra emphasis on having tons of tasty-sounding East Asian foods like dim sum and kimchi noodle bowls. Every new room has the potential for a mouth-watering box of traditional Russian blinis or a bottle of duck beer. 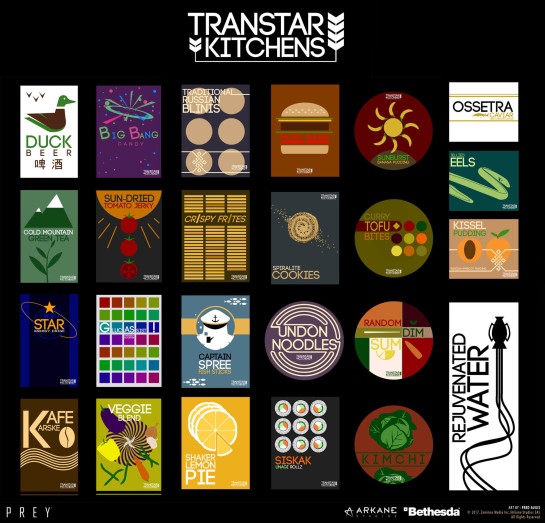 The underwater crew of Soma do not get such luxuries, as all they get are sad Munch Print food cubes. To be fair, Soma takes place at the literal end of the world, so expenses could be spared. No mega corporation money to fund space exploration fueled on taste. 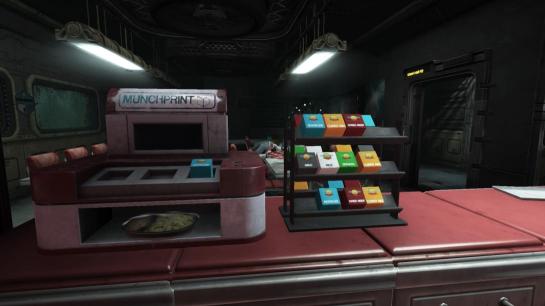 Recreation, usually ranging from means of relaxation like pool tables or System Shock 2’s colorful meditation garden, offers a small look into the social aspect of people living in these abandoned research facilities. Sports are a fun problem to solve, because how many indoor sports can be played in a facility where one strong ball kick could mean a flooded floor or a decompressed atmosphere? System Shock 2 and Prey’s fantastic rogue-lite DLC Mooncrash both decided on basketball, with one featuring a weird monkey Easter egg and the other providing excuses for an engineer to jury rig gravity lifts onto the court to improve everyone’s dunks.

Last piece of interest involves the amount of reused item assets. Most like armor, health, and food make sense, but more unique items are a little more unrealistic and the frequency is pretty funny. For example, System Shock 2 has a Game Boy parody device called the Game Pig, which, when combined with different discovered cartridges, plays pig themed Nokia phone quality games ranging from as simple tic-tac-toe to an Ultima clone. The Game Pig is neat at first, but because the game has no way to know when the player finds the sole one they would ever need, it peppers the item slot hog all throughout the game. A great thing to track  are the more complicated objects that show up everywhere. Soma, for instance, has a distinctive Buddha statue that pops up from crew quarters’ lounges to people’s personal rooms. It leaves this unintentionally goofy notion that, at one time in history, a bunch of boxes of these statues were freight shipped to the facility.

If exploration or semi-varied FPS combat sounds interesting, I really recommend checking out any of the games I listed, especially that System Shock 2 remake that may or may not ever exist. System Shock 2-likes really are distinct, and I’ll happily play all of them.