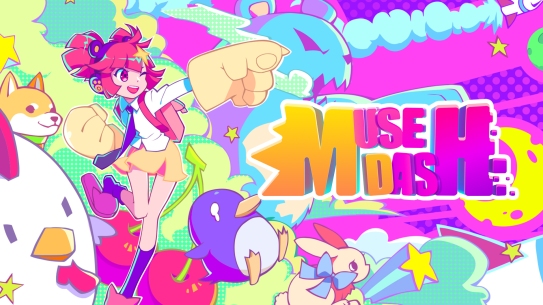 Muse Dash was originally released in 2018 by Peropero Games, an independent game development group from Guangzhou, China. According to an in-game loading screen tip, the game has seven devs. The game is available for mobile phones, the Nintendo Switch, and the PC through Steam.

Muse Dash is a rhythm game that borrows a few cues from action and platforming titles. One of the game’s playable girls – punkish Rin, mischievous Buro, and elegant Marija – runs through a stage while punting enemies and dodging obstacles that fly down the two on-screen lanes. The objective is simple: punt enemies, collect notes and hearts and try not to die from spikes, all to the beat of a song. If this sounds an awful lot like Game Freak’s 2013 3DS game Harmoknight, well, it is, but with more electronic music, faster gameplay and the ability to play as an anime girl in a maid outfit. 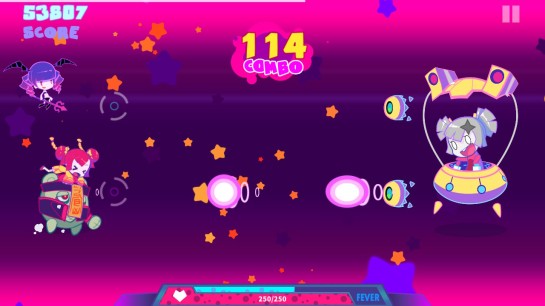 Somehow I didn’t break my combo while taking this screencap.

While Muse Dash can be played with two buttons (or two keys or two fingers, depending on your console of choice), its simplistic gameplay belies surprising amounts of challenge. The game ranks difficulty on an 1-10 scale, and below 8 things are mostly manageable. The hardest difficulties, on the other hand, are brutal, with way more enemies spawning on the screen at once (on both lanes at once, to boot), enemies spawning closer from the center of the screen and frequent appearances of spike hazards. The note frequency requires fine-tuned twitchy reflexes on par with brutal platformer indie games. In general, the highest difficulty levels straddle a fine line between fun challenge and messy difficulty plateau, and honestly it feels more like the latter.

There are plenty of unlockable things in Muse Dash that are gradually unveiled with the game’s leveling-up system. Curiously, the game has a weird item-drop based system where collecting a certain number of items (like baseballs or fish) unlocks something, though thankfully it’s not based on randomized item drops. Aside from additional songs, these unlockables include alternative costumes for the main girls that range from cutesy to saucy and enhance gameplay aspects like increased health or score multipliers. There are also support characters called ‘Elfins’ that will float alongside the main character and do things like provide healing or greater berth for note timing windows. Lastly, there’re also alternative start screen and loading screen images by some talented artists that are a delight to look at. 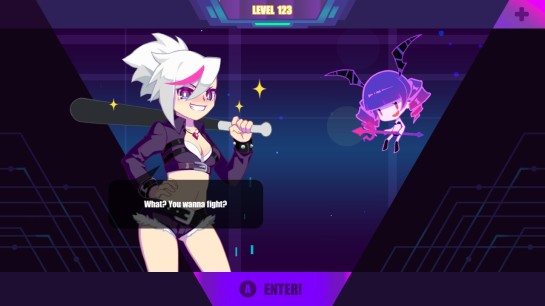 I can be ur angle or ur devil.

I’ll be perfectly blunt: this game is fun as hell. I can’t quite pinpoint any singular aspect that makes Muse Dash such a great serotonin dispenser but there are multiple components that make up a great whole. The simple yet fast-paced gameplay, combined with the catchy soundtrack selection and sheer amount of content to unlock kept me glued to the game instead of doing my usual ‘pop into the rhythm game for a bit before doing something else’. Additionally, the gameplay having a more coherent objective for a rhythm game beyond the usual ‘keep the beat correctly’ may also be a factor in my enjoyment. As of this writing, the game is still receiving on-going updates to add song packs and even more unlockable goodies, so even though I burned through the most up-to-date content in a fit of zero self-control, I’ll check up on this game regularly in the future.

Remember how I really love rhythm game design aesthetics? Another big facet of my love for Muse Dash is rooted in its aesthetics. The colorful, flat 2D design of the game hark back to flash-animated Western cartoons with angular designs and pastel colors, like with My Little Pony: Friendship is Magic. Another good comparison would be  Gainax’s Panty and Stocking with Garterbelt, except instead of semen ghosts you get to fight smiling candy corn projectiles, flying bowler hats, and distressed sentient vegetables. The backgrounds even have fun details like the cats(?) copulating on the roof in the ‘rainy night’ stage and the coyly posing skeletons in the ‘castle’ stage. Also, of note are the character select and song-completion portraits, which seem to be animated using something like the Live2d engine? It’s pretty neat if not unnecessary since the portraits are used in a limited capacity. This is a game that exudes charm in every little corner. 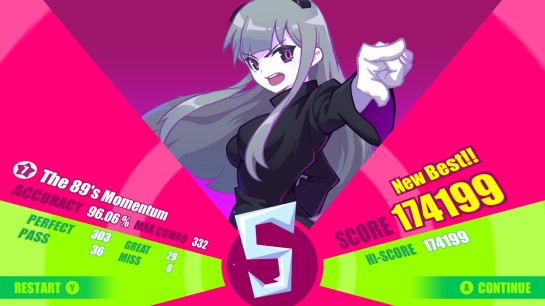 This song absolutely slaps, by the way.

If I have any minor gripes with Muse Dash that don’t involve the difficulty issues, I do wish some of the game’s costumes weren’t inherently tied to gameplay enhancements. For example, Rin has a goofy sleepwalker costume, wherein she’s clad in pajamas, smacks enemies with a pillow, and yawns lines about wanting to sleep more. However, this costume is treated as an ‘auto-play’ mode for practice purposes and can’t be manually controlled. Another egregious example is Marija’s little devil costume, which gives significant score multipliers at the cost of steadily draining Marija’s health as she progresses through a stage. The health drain can be fixed with the Lilith elfin, which will heal Marija in this costume for every ‘Perfect’ rating. HOWEVER, if the song does not have enough notes (either by inherent design or by difficulty), the healing will not offset Marija’s health drain, and thus the costume can only be used with certain songs. It’s a tiny issue but I do hope Peropero Games will consider changing the costume functions so they can be used more for aesthetic purposes.

Pros: Gameplay is mechanically simple but fast-paced and easy to pick up. Soundtrack is catchy with a heavy focus on pop and electronic stylings. Aesthetically pleasing, with a colorful 2D design focus, use of animated character portraits and gorgeous guest artwork. Makes it actually fun to work towards unlocking all of the extra costumes and other items. Satisfies my overly specific need to kick sentient vegetables to the beat of a song produced by Sakuzyo.

Cons: Highest difficulty setting has a massive skill ceiling that borders on being too chaotic. Costumes have gameplay enhancements attached to them and cannot be set solely for aesthetic reasons. The Nintendo Switch port of the game has an update delay compared to the other ports to offset the DLC being baked in.

Muse Dash’s simplicity embodies unexpectedly pure joy, charm, and addictiveness. Too addicting, in fact, that I’ve had to forcefully tear myself away from Muse Dash so I can make some progress on other games, like, say, Rayark’s rhythm games. Overall, Muse Dash is an excellent and above all, super fun, game, and I’m eager to see what else Peropero Games scrounges up.