I originally planned on writing this article on the many ways Japanese games represent different world religions, and while I might try again in the future, the only thing that came to mind was how the Catholic church was either a great place to save your game, like in the Dragon Quest games, or a headquarters for the cartoony evil initial villains, like in the Tales of games (Tales of the Abyss even made their Catholic church music themed with evil maestros and everything). I then decided to write about video games that go through religious doubt, but that’s far too complicated. Finally I decided “why not write about two different video game characters that followed similar character arcs to that of Final Fantasy IV’s Cecil Harvey?” In other words, characters whose doubt eventually caused them to refute their leaders’ plans when they decided that they no longer morally agreed.

Warning: Serious plot spoilers for both Breath of Fire 3 (BF3) and Asura’s Wrath (well, statutes of limitation on BF3, as I reserve the right to spoil a PS1 game that is old enough to drive in all 50 U.S. states).

Garr is one of the four Holy Guardians created by the head goddess of the Urukian tribe (similar to Mayan people) who revere Garr with respect, demonstrated by how they act completely unfazed by his large demonic appearance. Originally created centuries ago to start the Brood War, a conflict against a perceived world threating group of half dragon humans named Broods; Garr spends his semi-immortal life as the reigning champion of an underground fighting competition called the Contest of Champions. I see Garr’s role in Breath of Fire 3 as a world-worn guide for the main character, the once centuries dormant and perceived last living Brood descendent Ryu. Garr’s a perpetually crossed-armed reminder that he’s been around Breath of Fire 3’s post-apocalyptic fantasy block.

Garr, found in his natural habitat.

During the first half, when Garr brought Ryu to Angel’s Tower, a Brood graveyard, Garr secretly planned on killing Ryu. Conflicted about his role in life, Garr often struggled with what was more important: fulfilling his duty to enact his God’s wishes by destroying the Brood; or letting Ryu live. Garr felt doubtful of the Brood after they intentionally didn’t resist Garr and the other Guardians.  Leaving Garr to doubt his actions, but at this point still goes through with his God’s plan.

Years pass, and Garr decides to bring an older Ryu to meet Garr’s Goddess. For Garr, this act personally feels like the only way for Ryu to learn about his past, as well as give a bigger purpose to Garr’s existence. By this point, I felt Garr had yet to fully resist his Goddess given role of Brood executioner, but doubted its validity. The formal life as Contest of Champions top dog (gargoyle, demon thing?) shows that Garr’s true nature is to be that of a fighter, yes, but not an emotionless killer.

By Breath of Fire 3’s end, Garr’s unnamed up till then goddess is revealed to be Myria (some translations also call her Maria), Breath of Fire’s reoccurring evil god equivalent to Final Fantasy’s Chaos and Shin Megami Tensei’s Satan and Lucifer. 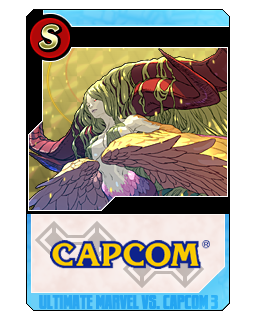 Now image her face opening into a maw that shoots lasers.

Myria originally created Garr and the Guardians to help in her plan to protect her people from two perceived dangers: future technology and the Brood. Fearful that her people would one day destroy themselves, as well as Myria’s need for complete compliance, and the feeling that she (it?) is the only entity that can pull this off, resulted in successfully alienating Garr. After traveling so many miles with Ryu, Garr now understood that the Brood was never evil. Garr’s personal doubt on the genocide he participated in manifests into a resolve to actively resist Myria’s plan, the only way he can redeem himself. 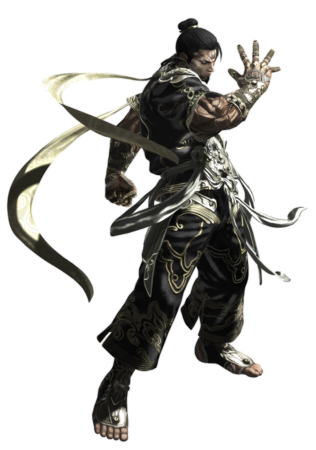 Now to transition to the demi-god Yasha from Asura’s Wrath. A somber man, Yasha once trained with Asura under their master Augus, developing a competitive friendship once described by Yasha’s sister and Asura’s wife Durga as “like water and oil”. Originally intended to combat the Gohma, a species of animal like monsters, Yasha fought alongside his step-brother Asura as a once-proud member of the Mantra wielding Eight Guardian Generals. This combat further escalated to space fights above their planet Gaea. After one big successful victory, Deus, leader of the Eight Guardian Generals, believed that Asura’s daughter, Mithra, was vital in completely destroying the Gohma’s core, lodged deep inside their planet Gaea.  Knowing that Asura wasn’t going to continue letting the Eight Guardian Generals exploit Mithra’s power, Deus had Yasha and the other Guardian Generals put him in charge; a plan that involved killing their leader, Emperor of Shinkoku, blaming the death on Asura, killing Asura’s wife Durga, and finally kidnapping Mithra.

Thousands of years pass and Yasha and the six remaining Guardian Generals have since renamed themselves the Seven Deities. Even as a member of the Seven Deities, God figures and protectors of the people of Gaea, Yasha constantly doubts his peers’ methods. Aptly identified as the Deity with the Mantra Affinity of Melancholy, Yasha goes  far to represses his stirred up emotions at being part of killing his sister, banishing his best friend, and locking up his niece, and he even wears an emotion muting mask to cover up his perpetual frown. Only Yasha’s strong conviction to bring about world peace pushes him to continue on with Deus’ plan, or “cause” as it is often called in the game. Yet, I knew that Yasha was morally opposed to the way the Seven Deities were fighting the Gohma; strengthening their power both by controlling Mithra and collecting millions of human souls. 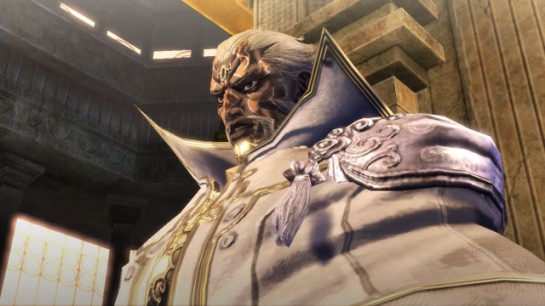 Not pictured: the bitchen business work attire Deus controls the world in.

Yasha’s continued disillusionment with the entire cause progresses after his valiant efforts to protect a prosperous city from a Gohma stampede are rendered meaningless after fellow Deity Sergei simply sends ships to destroy the Gohma, unintentionally blowing up the city in the process.  Deciding that Deus’ plan did more to corrupt the Deities and the people on Gaea then help, Yasha joins up with Asura, once again fighting with him to stop Deus. Just like Myria from before, a questioned Deus explains that he feels that he is the only one who can fix Gaea, proclaiming “I am the god that carries the fate of civilization on his shoulders”. Deus had let the last few millennia of god worship get the best of him, just like the rest of the Deities, but after yelling to Yasha “Another way? Did you think I had not considered that?! Did you think I had not considered other possibilities?!” I could tell that Yasha felt truly betrayed.

What’s great about this shot is how visually conflicted Yasha appears to be.

Comparatively, Garr and Yasha are two different characters which share a similar character arc. Both Garr and Yasha respectfully served leaders who ended up causing great harm, with Garr’s entire existence of  no-questions-asked, served  Myria’s plan to murder the Brood, and  Yasha willingly following Deus’ cause by assisting in controlling Mithra and collecting human souls. They both grew doubtful in their leaders, concluding that they had been helping to repress their worlds instead of helping it flourish. In the end, the moral conflicts between a gargoyle religious figure and a perpetually sad demi-god aren’t that different if you think about it.