It has been many weeks since I last sat down with my PS Vita,(so long, in fact, that the batteries had run dry while in sleep mode (PSP users will understand what I am talking about) as my 3DS often keeps me busy. Recently, I decided to give my Vita some well-deserved attention. At first I was ecstatic after hearing whispers that the PSN-only Atelier Meruru Plus had come out without my noticing, but I sadly realized later that a 3.2 GB file size and a full 40 dollar price tag would put quite the strain on both my memory card and wallet (Vita owners know storage space it is a precious commodity). Dejected, I decided to peruse the ol’ network for anything else of interest, where in I made a fortunate discovery in Malicious Rebirth: a game that actually made me sit down and enjoy my Vita once more.

Malicious Rebirth is an action game developed and published by Alvion Co., Ltd in 2012, as an enhanced port of their 2010 PS3 title Malicious. Both versions were published by Sony for their English-language release.

Rebirth is an interesting title where the plot of the game consists of a bunch of old men with ridiculously long beards, all dressed in white robes telling you (either as Valeria the male MC or Erica the female MC) that you must defeat the Malicious, bane of mankind. In order to defeat this foul opponent, you must restore the true power of the Mantle of Cinders, a scarf-like weapon capable of changing into various forms in the blink of an eye. The player obtains these deadly powers after defeating the power holders- bosses of incredible might, each specializing in one of your lost weapons, the fist, the blade, the shield, and the wings.

In truth, the real plot behind Malicious Rebirth is told through the background stories in the main menu. if you are willing to read through it, that is. While I am not too keen on having gameplay and a plot line separated like this, I can’t get too angry at a game priced at a mere 15 U.S. dollars. 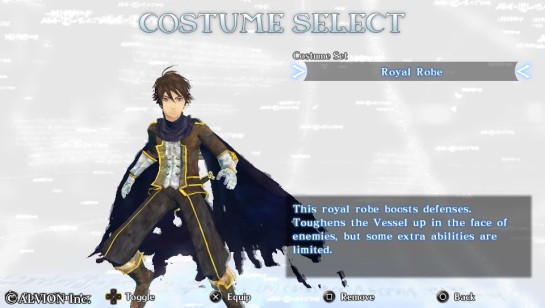 Ironically enough, the spiffiest costume is quite possibly the most practical.

As I just wrote, if the game and the plots are separate, and the plot is good, what about the gameplay? You start out with your fists and sorcerous bullets. The bullets are quick and have homing properties, but are rather weak, making them better for dispatching each power-holder’s unique army of baddies. The little foot soldiers serve two purposes:, making life slightly harder for you, and helping you build up aura. Aura is additional power you can give to your attacks; you will need aura in order to actually damage the bosses as they are too strong for you to inflict anything more than scratch damage with just regular attacks. A valid tactic would be to slowly build up Aura, but the thirty-minute time limit means that you can’t dilly-dally too much, which is where the chains come in. By imbuing your attacks with a little aura, and destroying baddies, you can start a kill counter that multiplies the amount of aura you earn, quickly netting you upwards of five thousand aura points. Catch is, if you don’t get the chain going quickly and precisely, then you are just wasting aura. 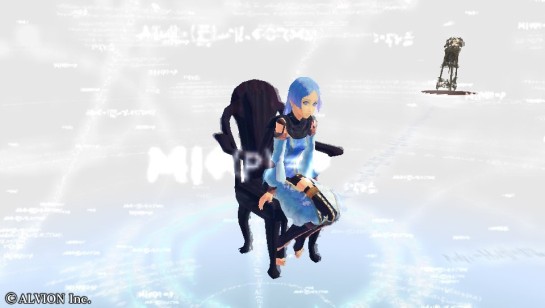 There is a lot of little details, like the alternating idle animations, that also vary depending on gender.

Once you have managed to build up enough aura, it is finally time to pay back the behemoth that has been chasing you around and making a nuisance out of itself. By releasing aura, you get a big boost in power to fight the power-holders. But the power-holders are not going to just let you pound them, requiring you to guard, dodge and run your way around their attacks and find an opening.
Eventually, your hard work is rewarded with additional powers like a sword for sweeping area-attacks, a spear for focused attacks, and wings that let you move at high speeds while attacking. It feels a lot like the Dynasty Warriors series, but faster, more complex, and you know, actually fun. Graphics are pretty, and the animation is fluid. There are also some very interesting skin details when you look at the player character after a fight; unfortunately they also look a tad polygonal from up close, For those who played the original, Rebirth has an additional chapter with six new bosses, and powers, adding two or three more hours to the originally four to five-hour game.

It seems breaking enemy parts is the new hot thing for action games.

Rebirth is quite a deal for just fifteen dollars, Of course, I am making time calculations based on an essentially flawless play through, odds you will be taking a little longer than six hours to beat this game. Even then, I speak more of the polish of the game rather than its length, because there are plenty of modes to keep you busy such as free-mode and time-attack.

Pros: Fast-paced gameplay and epic boss fights make Malicious Rebirth a must for any fan of action games, with added appeal to anyone looking for tactical value that doesn’t don’t involve puzzle boss fights. A small but fitting soundtrack with instrumental music, and wordless vocals are used to convey the mood in the likes of a fierce jungle, a underground crypt, and an imperious bedchamber.

Cons: Graphics are not as attractive up close. Save for a few, the additional costumes you can use are mostly useless, offering little in the way of practical function as the drawbacks they afflict do not outweigh the benefits they grant.

Malicious Rebirth is a game offering a delicate balance of risk-taking, speed, strategy and cool mechanics. It is challenging without being frustrating,  Rebirth doesn’t have a huge, engrossing plot, nor is it terribly long, but a lot effort and time was put into polishing this game until the developers could see their faces on it. With a fairly low price, there is very little reason why a vita owner should miss out on one of the best action games I have played in a long time.