Like Resident Evil, Megaman moves and shots like Chris Redfield and Jill Valentine. The PlayStation and 3D characters walking in 3D spaces shows its age in Megaman Legends. My theory was that both games were developed before the advent of the dual analog controller, which is true, but unlike Resident Evil’s Directors’ Cut adding in the function, Megaman is stuck with tank controls. I’ve seen playthroughs where people can do crazy stuff like jump Megaman in a circle and shoot at bosses while whipping the camera. But for me, he might as well have been named Harry Mason and this might as well have been Silent Hill. If I wanted to experience Kattelox Island’s colorful blocky streets and expressive Lego characters, I was going to do what I dreaded. I was going to replace skill with stat grinding.

A nice feature of Megaman Legends is how it rewards its small amount of dungeon exploring with trash and treasure, which Megaman’s shipmate Roll can model into new parts and weapons. These range from devices that shoot rockets or let Megaman skate around. However, each item has to be stat leveled, with money needed to be spent on aspects like increased range or ammo capacity. Gathering money takes over the game. I spent multiple hours walking in and out of the second energy crystal dungeon to fight these bug hive robots. Over and over again, I watched them eject their battery of wasps and crystals. Money can be made doing minigames, but those cap out after a few levels, and nothing online seems to beat the nests. 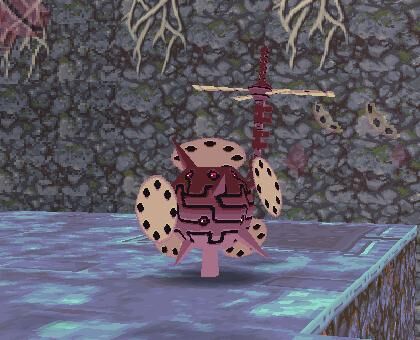 I really struggled with the final boss, especially its second form, so I was starving for currency. My favorite story while playing involved this one side quest where Megaman has to stop a bank robbery. After blowing up the robbers’ vehicle, controlled by some of the villainous Tron Bonne’s Servebots, Megaman is given the option to return the money they stole and take it for himself. If he returns it, everyone appreciates Megaman and you get some money, which you can give to the Servebots so they can open a burger shop. But I needed money. I needed upgrades to my Active Buster. So I took the money. The game has this clever notoriety system where doing certain nice things increases Megaman’s rapport with the town; however, it goes down and his overall color scheme darkens if he does bad things. Not returning the money, which I needed in order to prevent the damn island from being destroyed by lasers shot from a satellite in the sky, means now all the townspeople think Megaman is a crook and a low life! And after I donated all that money to rebuilding the post office and people’s literal homes. When the final boss made me truly desperate, I started to look into Megaman’s strongest weapon, the Shining Laser. Like most of Megaman’s best special weapons, the Shining Laser required parts, usually connected to side quests. Normally I appreciate these world building side quests, like helping the local boys finish their club house, expanding the museum, or funding a sick kid’s medical equipment, but I knew it would not be so simple. Megaman Legends has the old game problem of “ we hid this weapon behind this mini-game that requires a certain skill you don’t need anywhere else in the game to beat it”, and specifically it’s a racing mini-game. Controlling Megaman is already difficult while walking through the dungeon’s narrow halls, so being expected to finesse him through red cones on a time limit meant my Shining Laser dreams were over.

Despite all these problems, I still like Megaman Legends. Playstation games can have a unique, ultimate visual aesthetic when they are not going for realism, like why the cartoon-y models in Final Fantasy 7 are more appealing than the realistic ones in Final Fantasy 8. Fitting that an adventure game looks like a collection of toys and play sets. Megaman Volnutt doesn’t have much characterization, but he has one great scene where he finds out that the Bonne siblings are still alive (after their tenth mech fight with him), takes Tron Bonne’s hand, and shakes it up and down because he’s so happy they are alive. He’s a good boy and his poseable figure body and expressive flat face capture that element. I see why people like the Legends games, and it made my struggle worth it. The fact that Capcom seems to have abandoned these games and I can’t play an easier/more balanced remake devastates me. Yet, I’m actually excited to play 2, something I didn’t expect after getting easily beaten by the Hanmuru Doll.