Recently I’ve been trying to return to my childhood years of early Yu–Gi-Oh! videogames. Mixing nostalgia for the only trading card game I ever really got into and a desire to play a handheld game that was not another RPG, I recently played through both Yu-Gi-Oh! GX: Tag Battle for the PSP and Yu-Gi-Oh! GX: Spirit Caller on the DS. While I grew tired of Tag Battle’s Persona-style dating sim mechanics wherein I fed weird sandwiches to the high school cast of Yu-Gi-Oh GX’s duel academy, I did complete Spirit Caller.

Spirit Caller’s big draw for me was the character customization, which was mostly a superfluous addition to the game that would allow me to dress up my hapless Slifer Red duelist child prodigy into someone the rest of the campus respected. In Spirit Caller, the player can unlock different outfits and duel disks after winning against certain characters. An early example is beating old Ra Yellow dorm Professor Satyr; I had to beat his easy Japanese curry-themed deck over thirty times before he gave up his Ra Yellow student uniform. Yes, I was going to have to work overtime, dueling these other characters dozens of times for something as basic as a cosmetic addition to a player character I was expected to stare at for a rather long game. My Obelisk Blue dreams died that day.

I wanted to beat high school boys and girls, and their professors, at a card game, in that jacket sooooo badly.

What is the point of burying unlockable costumes? Similar to my old video game room article, unlockable costumes are one of my favorite non-essential aspects of videogames. Costumes are the sole reason I played the job class-focused Final Fantasy X-2 with its dresspheres, where in the Gullwings’ Yuna, Rikku, and Pain all got their own version of the Dark Knight armor. They are often a selling point when it comes to longer games.

Many games like to put unlockable costumes on the same level as a secret bonus dungeon or optional boss. In other words, a prize to be given to players who either play though the game multiple times or seek out pure difficulty. Sometimes, costume changes are even restricted to the post-game, a no-man’s land for lots of players such as myself.

Take, for instance, survival horror games like Silent Hill 3 and the early Resident Evil games. SH3 restricts all of Heather Mason’s amazing outfits, which range from 2003-era video game websites and magazine t-shirts, a magical girl costume and the superior god of thunder outfit, to the post-game. Nonetheless, SH3 makes the costumes easy to unlock. On top of that, SH3 is also a short game with new-game plus weapons like the doorknob saber, and multiple endings which gives the player opportunities and incentives to wear the new outfits.

Best character costume in a videogame. I do not make the rules, I just enforce them.

This is not so with RE and its hidden costume rooms. These cheeky secret rooms are only available to players who have at least beaten the game on normal. I love the RE series to death, but I am pretty bad at the games. I got through RE2 and 3 because of easy mode and infinite ammo but couldn’t beat Code Veronica due to its lack of easy mode. I understand that, back then, especially with the original RE, costumes were rewards for players who found value in beating the game multiple times on higher difficulties. But to me, was the infinite rocket launcher not a good enough reward for skilled players that snowboarder Chris Redfield also had to be bundled together?

A rather glaring example combing both Spirit Caller’s obtuse busy work with RE’s difficulty costume rooms would be One Piece Unlimited Adventure on the Wii. I really enjoyed Unlimited Adventure’s little details and design nuances (for instance, how multi hand Devil Fruit user Robin will sprout extra arms to reel in a fish) in a game that combined low-level item crafting (before it became bog standard in every early-access indie game) with Metroid-style adventure game exploration. Unlimited Adventure was a game that kept trying my patience when item crafting was an important part of providing certain Straw Hat Pirates with their best weapons and special attacks. However, when it came to costumes, Unlimited Adventure lost me entirely. To be given the “privilege” to even make new costumes, I would have to unlock and beat optional boss Mr. 2 Bon Clay (or Mr. 2 Bon Kurei for you scanlation kids), then dig up a treasure chest located in the final dungeon, build an actual costume/dressing room in the crew’s camp site, and finally craft each costume character by character.

At least Mr. 2 Bon Clay’s disguise based Clone-Clone Devi Fruit power is thematically appropriate for different costumes. Not like the changing room had to be unlocked by beating undercover criminal Princess Vivi…wait a minute!

Longer games like Unlimited Adventure and my next example, the 3DS remake of Dragon Quest VIII, encapsulate this tendency to keep costumes limited to late parts of the game. DQVIII is one of the longer DQ adventures, and you use the same four party members for most of that time. For me, new costumes can shake up late-game drudgery, so I attempted to find them. Unfortunately, certain costumes were relegated to obtuse alchemy recipes or post-game territory. The only costume that I was ultimately able to make that wasn’t in the final dungeon was for ax-bandit and best DQVIII character Yangus. Coincidentally, I turned him into a pirate, and had to spent maybe an hour or two crafting the costume, but it was worth it.

Reality is not all bad when it comes to lovers of the costume. While Yakuza 0 kept the unnecessary post-game costume tradition and denied me the pleasure of having protagonists Kiryu and Majima wear their karaoke getups, Yakuza spinoff Fist of the North Star: Lost Paradise punched that notion in the center of the head. About two hours in, Kenshiro gets an apartment hangout which lets him change costumes. You get options like bartender and host club manager Kenshiro, but my favorite is a golden goth redesign of Kenshiro’s classic blue jean jacket. I was hesitant to jump into Lost Paradise and look at the back of classic Kenshiro for twenty-plus hours but getting to play as a blinged-out Kenshiro pushed me to continue. 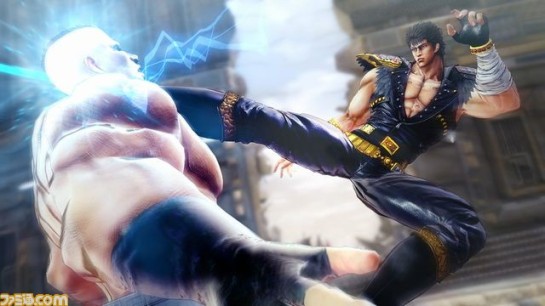 Look at how fine Kenshiro is dressed. That was me for 20 plus hours. Constantly worried about getting goon blood on my fresh digs.

Tales games are the perfect microcosm of what is bad and good about character costumes. On one hand, the earlier games hide costumes behind easy-to-miss side missions and trigger events. The age-old adage for Tales was “sorry buddy, you did not sleep in the inn a second or third time after the cutscene, guess you are not getting this character dressed like a butler”. Often costumes were associated with titles or key items, so costumes had actual in-game status effects. I got used to having Tales of Symphonia 2’s protagonist Emil wear a tiny king’s crown for half of the game because all the other accessories lowered stats.

Tales of Vesperia was amazing though, because the accessories allowed for references to other games and general humor. You get neat little callbacks like being able to make Yuri wear a Katamari Damacy Prince stuffed plush or Estelle wear a Pac-Man shaped hair clip. Often, costumes will even allow characters to dress like previous Tales character, like the PS3 port of Symphonia that gave Genis a Luke from Abyss outfit. Plus, everyone also got their own character specific water canteen! This makes every journey feel unique, because these characters get to look as awesome or as dumb as the player wants. In my playthrough, the heroes beat the bad guys while all wearing those 90’s anime swirly glasses. Costumes can even change the overall tone of a playthrough, like how I played the first Guacamelee! as the blue version of Tostada, protagonist Juan’s spiritual female adviser and teacher. It felt like I got to experience Tostada adventure, not Juan’s.

Patty dressed like Anise is okay, but what about Presea dressed like Klonoa? No, you can go look up those names yourself if you want context.

Finally, the topic of DLC costumes must be discussed. An argument could be made that DLC costumes are asking a player to pay for something they would normally just unlock by playing the game. As time goes on and my dislike of DLC turned into a realization that this is probably the only way developers can eke out revenue from a game, I eventually bought my own share of DLC costumes. Returning to my earlier point about how Resident Evil would restrict costumes to difficulty, I played through all the RE Zero remaster constantly swapping out the costumes. I knew I was only going to play through RE Zero once, so I bought all the DLC outfits, and gained a genuine enjoyment from running through the Marcus mansion with Rebecca dressed like a cowgirl and Billy dressed like a yakuza member or Cody from Street Fighter. There was no way I would be able to be good enough at RE Zero to unlock this stuff traditionally, but this let me experience the costumes and altered my enjoyment of backtracking through the cafeteria twelve times looking for health packs.

I do not have to be good at RE Zero to appreciate Rebecca’s high school basketball outfit because I, too, found that easter egg in RE 2 on Albert Wesker’s desk.

I still want progress-based costumes to be available in games, but a developer may as well recoup their money and time if they have to model iDOLM@STER costumes for Tales of characters. Sorry to the small amount of people in that Venn diagram who want that. At their core, character costumes are secondary additions often not integral to the core of a game, but because they have the capacity to make each player’s playthrough unique I think they have value. It is unfortunate that they are often locked in a room that only skilled or time-willing players can open.