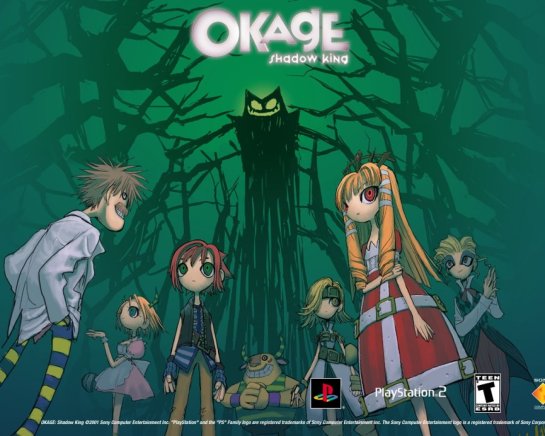 A few months ago I was amusing myself with an early PS2 game called Okage: Shadow King, a delightfully goofy game that doesn’t bother to take itself seriously for eighty-five percent of the story. Okage is the kind of game that at first sight, seems purely crafted for goofy entertainment, a fair bit of foreshadowing and clues that let you get  the deeper nature of the game’s world. But ultimately, you will remember Okage because it makes you laugh, snicker and chuckle.It is the kind of game that makes talking in Pig Latin a terrible curse, our protagonist the prize winner for “most overshadowed character”, and includes such bosses as the Sewer Evil King, the Company President Evil King, and the Idol Evil King. I feel comedy focused games are missing nowadays, leaving only games that take themselves too seriously.

As much as I enjoy a poignant narrative, such as: that of Radiant Historia, a story of loss and how time travel will not necessarily solve everything; and Xenoblade, a tale of revenge and how easy it makes it for others to use you as their pawn, great stories, but they have a fill of plot devices we have all seen before. I know that anyone with a true love for games and their favorite genre knows that they all have trappings, traditions, and weird habits that deserve the occasional mocking. 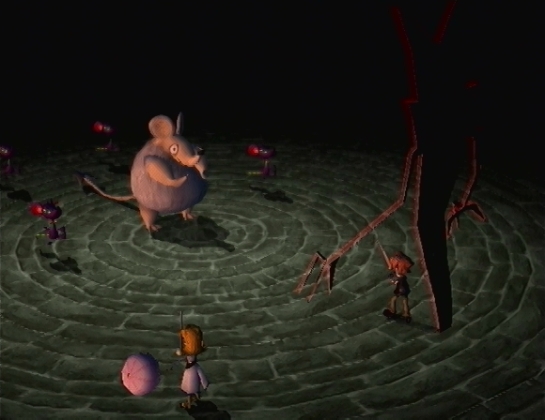 I present to you, the Sewer Evil King.

I appreciate games such as Disgaea and other titles that NIS publishes that love to use goofy characters ( with outrageous level caps) that make fun of anime and game clichés, to say nothing of obliterating the fourth wall. But even these goofy characters have their share of drama and heavy themes that become more pronounced as the game progresses. I mean, two plots about demon children wanting to overthrow their overlord fathers is enough, okay? I feel like they stand in more as buffers (chemistry humor, yes?). But I feel they do not go far enough into the comedy to get anywhere near Okage. It feels like recent game developers aren’t as willing to play with narrative perspectives. For instance, Okage effectively puts you on the villains’ side while making fun of the many clichés and mistakes a villain in a fantasy story has to go through, like kidnapping princesses, why do heroes fight?  The actual motivations the villains seem to lack when committing acts of evil. But Okage’s weird existence as a comedy game doesn’t mean the game can’t be jokey without meshing with the entire story.

Another good alternative is to have a specific section where the game makes fun of itself. The seraphic gate in Valkyrie Profile: Covenant of the Plume on the DS, which I reviewed not too long ago, felt perfectly fine making fun of the tragic pasts (and ends) of its many characters in a sad, sad, game. Also, certain characters turned into tsunderes, so just imagine a young Norse warrior trying to figure out how to react to lines like “D-don’t misunderstand, it’s not like I care what happens to you, or anything!”. I feel bonus dungeons, like the seraphic gate, are perfect for this kind of thing.

We also have parody games like Sega’s Japan-only Segagaga which made fun of its own failed Dreamcast console as you fought every conceivable Sega character like Amigo from Samba de Amigo. There is Compile Heart’s Hyperdimension Neptunia series, which mixes the console wars with a healthy heaping of more, gamer, and game-industry in-jokes like making Keiji Inafune of Megaman fame into a weapon (full of wrath). While I have not had the pleasure of actually playing any of the Hyperdimension Neptunia games, I shall remedy that as soon as NIS brings the vita versions over.

Watch your back Capcom, that little girl is not to be trifled with.

To give a non J-RPG example, there is Costume Quest, a Halloween-themed RPG jam-packed (pardon the pun, or not.) with jokes on everything from patriotism, bad puns, to candy-stealing, as well as Halloween traditions and bad costumes. I honestly feel these games are sorely needed in today’s market to breathe fresh air into a medium that can very easily stale on popular trends. Producing these games shows signs of distinct creativity, and an awareness of the climate developers work in. And while I quite blatantly speak almost entirely of RPGs, I fervently believe you can apply this to any genre. I am sure modern FPSs could certainly make use of some humor. I may be biased over my love for comedy, but I don’t think there are very many people out who don’t enjoy a good laugh. To say nothing of simply laughing at one’s own expense. We need more video games like Okage: Shadow King. Here’s hoping we see more developers taking a long look at themselves, their fans, and the industry, and maybe remember how to laugh at themselves again.