To start with an overly broad statement, “How often have you put a game down for a large amount of time because of X reason?”. I personally am talking on whenever say, I buy a cheap copy of an Advance Wars game because I wanted to take another stab at a strategy-game, even though I know I am terrible at the genre. Or the time I bought a port of fighting games like the PSP version of Street Fighter Alpha Three or the Wii version of Guilty Gear XX Accent Core Plus (which I equate now as a twenty dollar soundtrack + a game), to then learn I am not hardcore enough a fighting game player to warrant such purchases. Or even the time I kept forgetting to get the No More Heroes’ save data from my friend’s Wii because I played the game with them at their house, and was later hesitant to restart. Yet the perfect example I can recall is none-other than that bastion of George Romero-no relation, 2006’s Dead Rising from Capcom.

Detroit Lions linebacker, I mean photojournalist Frank West is following a news scoop that has him traveling by helicopter over the Colorado town of Williamette. At first believing his attempt at Gonzo journalism will have him simply facing a town riot, he learns that the city violence is caused by not by civil uprising, but zombies. Getting off at the top of Williamette’s large shopping mall, Frank is set to get him that scoop, making him famous in the field of “make sure you get the shot, even when the subject is about to kill you”. Mysteries are afoot though when trained Department of Homeland Security agents Brad Garrison and Jessie McCarthy try and hide from Frank that there is more going on in the Wiliamette mall then zombies and marauding psychopaths. From there, Frank has to make his way from scoop to scoop, solving his own mystery in an open-world game with shops to explore and misc. objects to defend himself. 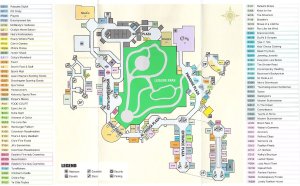 I ended up relying on this map as much as the average metroidvania.

Easier said than done. I made that Detroit Lions linebacker crack for more than laughs, because Frank is a clumsy, slow, oaf of a protagonist. Dead Rising expects me to get through hordes of zombie, while Frank clutches his camera in one hand as he saunters off like he has a bum leg. While I find the game to focus more on direct action then survival horror, those survival horror troupes of nerfed movement, guns you do not focus but simply shot at the center of the target’s mass (taking the small realism in a zombie anything and the absurdity of this next statement, “bludgeoning and bladed weapons are simply more fitted to zombie killing then fire-arms”), and that feeling of flight-not-fight do try to steer me wrong. Next comes the excitement shattering loading frames. Does not matter if you are moving between rooms or in the middle of a cut scene, you are going to see that loading line on screen. Reminded me of the reason Dead Space 2 was on two discs, so the adrenalin pumping monster eviscerating action was not constantly interrupted by loading. Add in a save system that can require you to restart your campaign process if you die, and you are left with an uninviting Dead Rising. 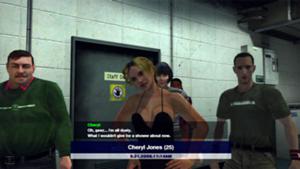 Where you see the rough textures of a bunch of survivors, I see a nail-biting induced successful executed mission.

Yet to make a dated reference to Woody Harrellson’s character Tallahassee from Zombieland, “I did nut up and did not shut up”. You play the game, the game does not play you. Dead Rising bills itself as an open-world action game, a fantasy not befitting it over all difficulty. In response, I turned Dead Rising into a micromanagement game (like a Harvest Moon game, but replace animal nurturing with zombie avoiding) where I would first outline rescue operations and psychopath removal paths before I ever caved in a zombie skull. Keeping track of time is key in Dead Rising, with exploring acting as a second benefit. Using the mall’s over world map, I think out loud to the T.V. screen “Okay, first I run to the antique shop for katana and battle axes, then I run to the coffee shop for orange juice, then I will be ready to confront the abusive mammoth of a cop in the woman’s clothing store”, base level organization at its finest. The feeling of returning to the comfy security room safe zone, mission accomplished with psychopath blood on my fancy dress clothes (did I mention Frank can change clothes in the various clothing outlets?) and survivors in toe, is phenomenal. Dead Rising gave me a hard, but accomplish-able obstacle, and like a good game, I felt a feeling of accomplishment from my test of skill in overcoming said obstacle.

Wow, look at how many everyday objects I can use to fight zombies…and how all but four are worthless.

The answer to “what to do with a game you cannot get into” seems to be try to play it differently from the way it was intended. Once I started to get my own pace in Dead Rising, understanding that quick open-word action was going to come with a difficulty only planning ahead like a micromanagement game could restrain, I started to enjoy myself. Now I understand this is not applicable to every game, but it is at least something to try. Mission accomplished?