Outside is a far more expansive and honestly impressive game. Now Krukoy has full color animated cutscenes and Milk gets to have an animated sprite that visibly moves her mouth when she talks, which, for visual novels, is unfortunately rare. More potential details are given about Milk’s family life and the bulk of Outside is a point-and click about helping her find thoughts, which she visualizes as fireflies. Milk seems oppressed in her claustrophobic bedroom, with a balcony that looks out into a donut-shaped apartment complex, fully surrounded by the rest of the building. It’s reminiscent of that one liminal space apartment with the “outside” ceiling, or the apartment tower from Ichi The Killer. It’s late by the time Milk gets back from getting milk, so actions in Outside all take place before Milk goes to bed and dictate which type of dream she has.

Milk is a mood.

Horror games need to breathe in mood and visuals. Milk’s black and red vision make everything feel small and empty, even when the grocery store plays goofy music over its speakers. A black void frequently shows up in the games as a reverse moon, and the monsters have irregular shapes. Almost all of the truly fantastical elements are restricted to Milk’s dreams, like stairways outside towers that go on forever or a pizzeria that offers buy two , get two pizzas free deals. A problem arises in Outside, where Milk does one thing that breaks the boundaries of the otherwise normal (besides the obvious) world. Milk does something extremely dangerous and walks away from it like it was  remembering to make sure the front door of a house was locked before going to bed. This incongruent instance is disturbing yet interesting, but it makes Inside’s and Outside’s narrative scattered. Dark material, as seen in one of my favorite games Lisa: The Painful, runs the risk of being edgy if the despair doesn’t have at least some hope. After two games, there are still so many questions. 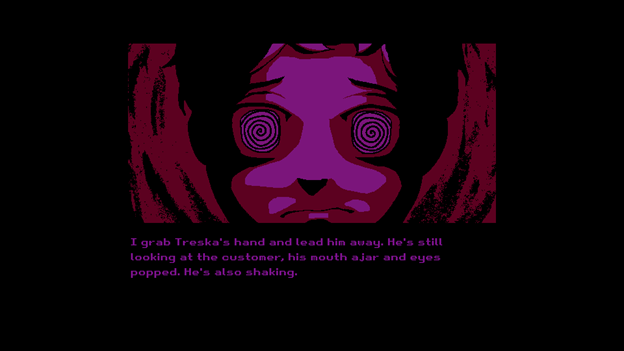 There also might be some kind of Scary Door.

This needs to be covered somewhere, but these are games about a character dealing with a severe mental illness. I’m only being an armchair psychiatrist, but I interpret the normally negative player’s presence in Milks mind as that of  Schizophrenia’s voice. Video games have involved mental illness in the past, with often mixed and usually lousy results (I’ve read that The Medium is a recent rough example). Sole developer games like Inside and Outside allow for a deep reflection of one person’s lived experience, so I can only assume the best intentions from the creator, Nikita Kryukov. For instance, I struggled with the depiction of the trans antagonist of a point-and-click adventure game I once played but felt better when I learned one of the two developers was a trans woman. Outside fixates on medication and its place in Milk’s life in a way that is worrisome. I personally take daily medications and have friends who do as well, and I’m easily irked by any narrative that would push away from the potential boon of medication. Disability Visibility, a collection of essays by individuals with both physical and emotional conditions, edited by Alice Wong, has a piece by fantasy writer Shoshana Kessock. In the piece, Kessock discusses online pressure they experienced to stop taking their medication for years because they were concerned that it would kill their artistic drive and spirit. Kessock ends the piece by thanking their medication and wishing to get back all the years they had without it. I don’t want Outside to end up promoting this resistance to medication.

Pros: Visually and musically impressive horror that places the player choice role in a unique position. Weird in a mellow subtle way that a lot of horror anything struggles with.

Cons: Requires an audience that is okay with stand alone smaller games with a fear, similar to the enjoyable but as of now uncompleted, Jisei series, that this story-focused game might not have an ending. Depictions of suicide, mental health, and medication might upset certain players and might land in a worse place in future games. Inside‘s English translation is really hard to follow and is full of typos.

Inside and Outside are both available on Steam and Itch.io. Both games, but especially Outside, are telling an engaging horror story that creates a unique perspective for the player character in a visual novel. I will keep playing these games, but with the added concern that the narrative might never conclude or run the risk of falling into unpleasant abject nihilism. That said, I still think they are worth playing.