As point-and-clicks go, Here Come the Mystery Teens! is easy, even for someone like me who literally clenches their teeth whenever a slide puzzle pops up. Maneuvering Saber around all five characters would be difficult, so the game quickly splits them up and divides puzzles into different sections of the house, with two characters each. Most puzzles just involve searching for a ghost and giving them what they want, but some are either more focused on character interaction, like the art gallery room, or are clever, like a puzzle with a bed that will not be spoiled. An invisible barrier that pushes Sabre back because it’s a wind puzzle was the only real annoyance, but that was related to the  controls.

The best way to describe the look and feel of Here Come the Mystery Teens! is if people from the show Doug were really into Scooby-Doo. I appreciate  the way references are handled as it’s not just characters saying “well, isn’t this just like Scooby-Doo?” For instance, Sunbeam Song tries to make a tall sandwich when investigating the kitchen, which is clear nod to whenever Shaggy would “investigate” the kitchen to make a five feet tall “snack” that he would eat in one bite. Or when a character refers to an old case the Mystery Teens were on that involved an old man pretending to be a ghost. 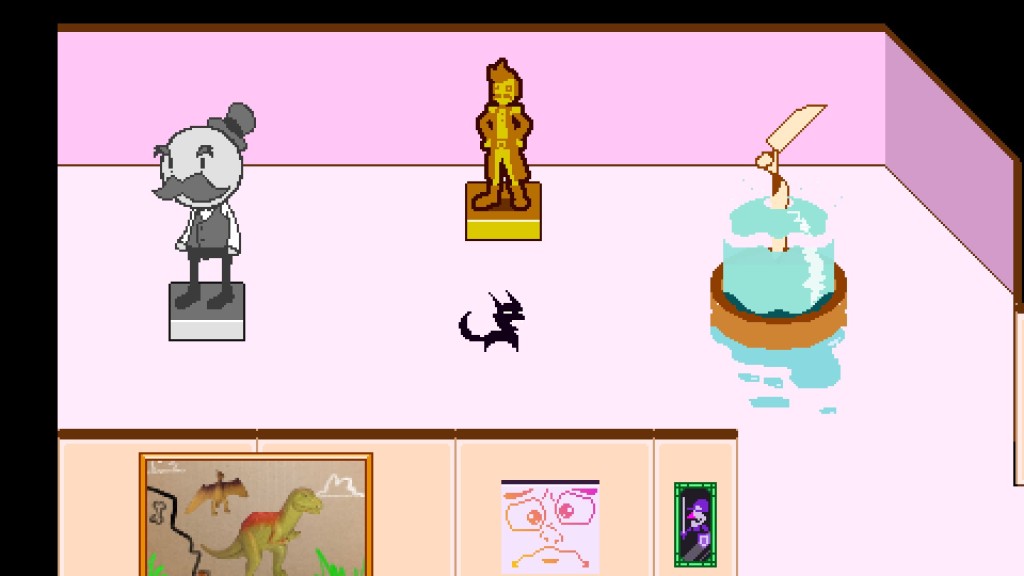 Saber is not impressed by the knife water fountain.

The Doug background character look that Here Come the Mystery Teens! has is colorful but garish in a charming way. While some characters, like Duke, look like a Simpsons character and Sunbeam is salmon pink, in true Doug fashion, other characters look like humans. Like how Doug himself looked human, but Skeeter was blue, or Roger was green. It makes the game stand out and creates an almost Power Rangers/ Super Sentai team color coordination. Overall art wise, the ghosts, especially the insightful but gloomy Spirit of Toilet Thoughts, look distinctive, or  in the case of a later dancing ghost, almost creepy. The only glaring art issue was that one of Valorie’s portraits make her look like the side of her head was melting. 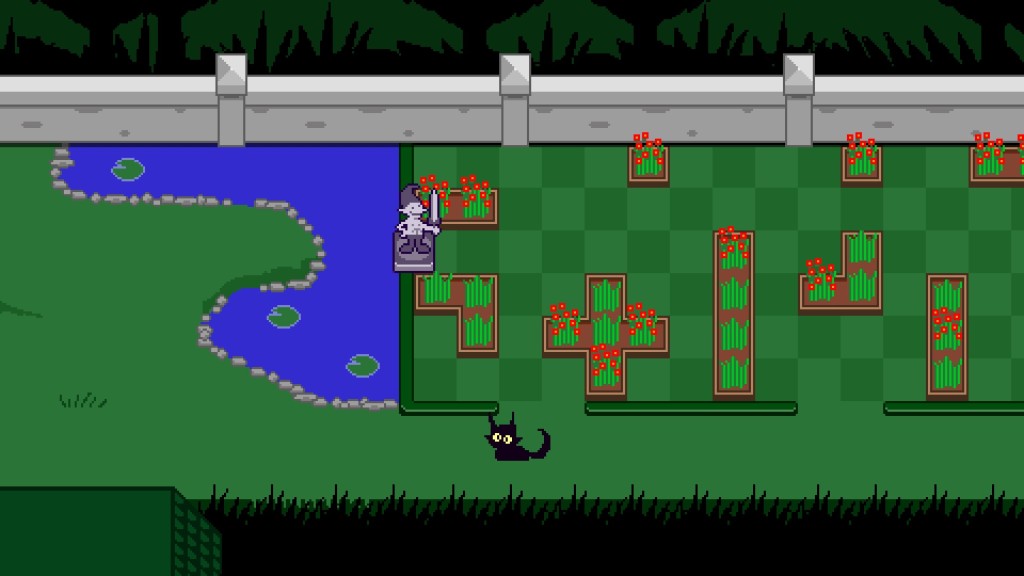 The Beefy Gnome protects the garden from all weeds. But not worms, as they scare him.

What’s most enjoyable about Mystery Teens are its subtle attempts at character and narrative depth. Sunbeam has a Navi from Zelda: Ocarina of Time like ghost named Glimmer, who, like all ghosts in the game, can only communicate with Sabre. Glimmer adds a level of nuance to Sunbeam by discussing her not great childhood, and how her current rosy demeaner is her trying to compensate. Or how Valerie is usually the strong aggressive one but hides a level of vulnerability that gets some exploration. Without spoilers, the game does work as an exploration of artistic representation and the feeling that no one is seeing or appreciating your creative output. This is something unexpected from something that looks like an hour-long Scooby-Doo homage.

Here Come the Mystery Teens! is available on Itch.io and Steam. What I enjoy about similar indie games made by one to two people is being able to see all the little artistic strokes and hang-ups from a creative. Like how the art gallery music is reminiscent of a Mario game or the part where Larold and Mugsy play the theme song to Press Buttons N Talk and directly reference the premise of the channel. It’s a singular vision. Taking  around an hour to play through it, Here Come the Mystery Teens! feels like an episode of a TV show, which means that if Alex Mankin wants to make another “episode” to further flesh out his characters, then I would gladly play it.

One thought on “Here Come the Mystery Teens! Review: Looking For Someone Else’s Spooky Inheritance”