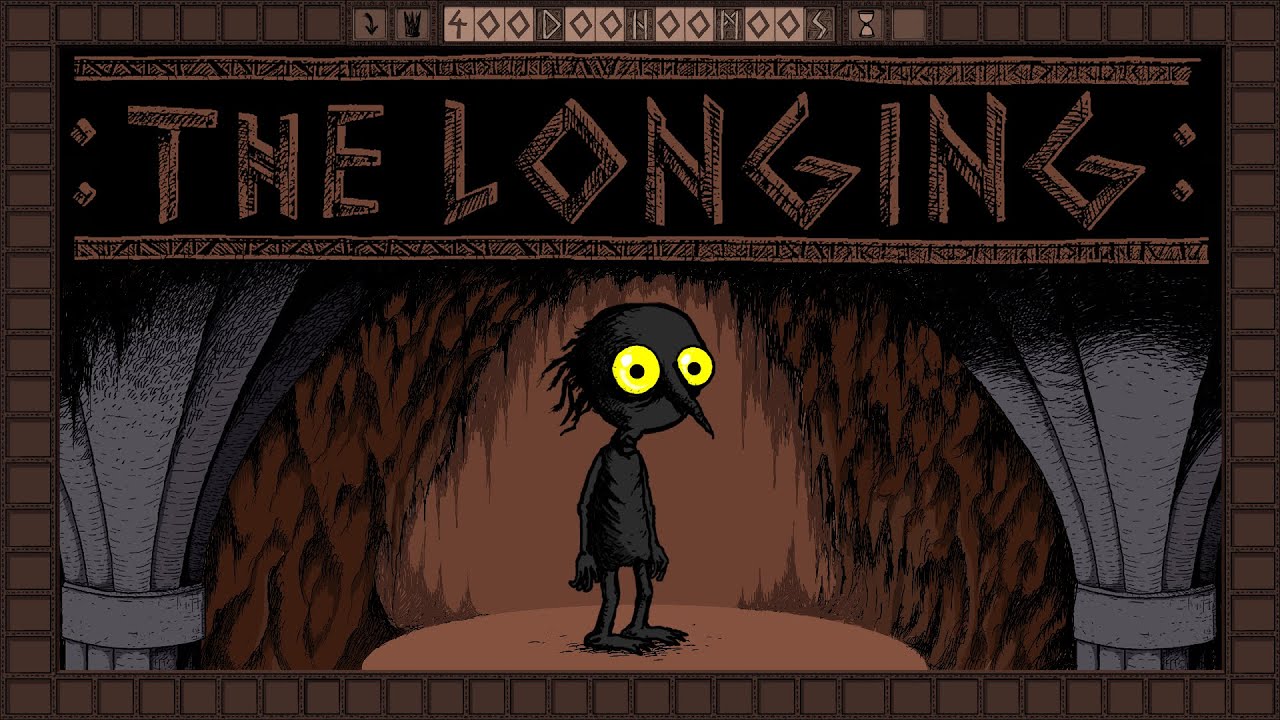 The Longing, developed by German animation and video game developers Studio Seufz, centers on a rock king’s last-ditch effort to stay in control. The king does so by reserving the last of his energy to create a tiny Shade creature (who will be simply addressed as Shade from now on) to wake him up in 400 days once his power has been restored. Shade is not given much instruction beyond some reminders about how they shouldn’t wonder to far from their underground palace, so Shade must find something to preoccupy the wait. Or better yet, preoccupy the longing.

Looking like a cute combination of a Heartless from Kingdom Hearts and Mr. Burns from The Simpsons, but drawn by Edward Gorey, Shade’s average day follows the same few patterns. They can explore an area to look for either an escape from their role as a living alarm clock or locate items to make their living space cozier. These items range from classical literature to read, paper to draw dark but occasionally deeply metaphorical pictures, and  enormous decorative crystals. This early exploration lasts for about an hour or so before Shade comes up against a few key obstacles, like a stalactite that won’t fall for a week or moss that hasn’t grown yet. Shade also walks slowly. Like super slowly. And so, The Longing reveals itself as an idle game.

Shade is a mood. Example 1

Idle games, often likened by me to genre titan Cookie Clicker (otherwise called an incremental game), are games that requires repeated actions that take place without the players direct action. For example, I used to play Ultimate Kept Man Life on Android, whose gameplay involved accumulating enough wealth to convince my fictional fiance’s dad to let me get married.  This was a task I could do by checking my phone once every few hours. Other phone games like The Simpsons: Tapped Out have a similar wait mechanic. The Longing has a mechanic where Shade can memorize individual places they have previously visited, like a treasure hallway or a library, and walk back there. But that often takes multiple minutes at a time because Shade leisurely waltzes to each place.

The unspoken conflict in The Longing is the player’s desire to speed up the process in order to access new areas or complete more parts of Shade’s home, versus Shade’s general lack of drive. Another example is  when the player wants to make the day time go faster by having Shade speed read Moby Dick or The Secret Garden, versus Shade’s dismissal of walking through a half opened door because they have all the time in the world to wait for it to completely open. Time passes faster in Shade’s home, extended by the amount of objects Shade has collected or created. On the surface, this gives the player a workable set of goals that ties into the overall 400-day conceit of the game, but Shade is in no hurry.

Shade is a mood. Example 2

To be fair to Shade, Shade is a character. While Shade is a capable artist and avid reader, Shade is also only a few hours old, so everything is a marvel to them. Splashing through water or finding a lone spider to befriend are  epic events for Shade’s overall optimism-limited world. Shade’s presence adds a level of pathos to player action. While filling up Shade’s house progresses the game in a gameplay sense (which I have written before about how that’s some of my favorite aspects of video games), merit is also derived from feeling like you actually made Shade’s terrible role easier. Shade will often comment how their task has become more bearable because they got to burn time practicing playing an instrument or taking a casual stroll. It’s a good commentary on the way preoccupation helps with long waiting.

Player and player character agency is one of The Longing‘s strongest points. Shade does not stop existing when the game is turned off. Granted, Shade will take a nap in the meantime, but it’s on the cold rock ground where they were left. I felt bad about the amount of work I got Shade to do while I myself read a book (not Moby Dick) while Shade dug a tunnel. One notable location is called the Hall of Eternity that stops the game’s clock. While it’s filled with new books and furniture, it does require Shade to walk in a straight line. Every minute walking right is a  minute Shade has to walk back left. Shade’s longest expedition in the Hall took forty-six minutes just to leave. Thankfully, as a show of respect for Shade, the game never makes them perform a task so lengthy that it requires the game to idle. The worst and easily darkest moment was the time I tried to test what would happen if Shade took a nap in one of the game’s few open pools of water.

Shade is a mood. Example 3

The adventure aspect of The Longing is where things start to collapse. Because of the small size of the map and the location memory mechanic, most of the initial exploration can be completed rather quickly. Most of the rooms are either just long halls or rooms filled with landmark-free doors. The worst is a doorway maze reminiscent of the notorious Death Mountain from Zelda II. Once a particular key item is found, the rest of the game becomes unfortunately linear. The kicker is that this important item can be permanently destroyed but then replaced, but the time it takes to replace slows the game down to a crawl. The time mechanic relating to exploring also cannot be blamed on Shade alone, as some of the game’s endings and more complex areas require more waiting in place. The idle mechanic is a little too cleaver for its own good, wherein the inability to mess with the computer’s clock, a common shorthand for idle sections in other games like Fez and Super Brothers: Sword and Sorcery, drags the game out longer than is welcome.

Pros: An interesting premise whose theme of the slow passage of time in relation to events is rather novel, at least for the first few hours. Shade is a charming and sympathetic character that allows for an exploration of player versus player character agency. Any game with room decorating gets an easy pass into ‘at least decent’ territory. Weirdly dark environmental writing that never gets too edgy.

Cons: Idle mechanics are a little too clever and rigid to maintain the game’s thin adventure game half. Controlling Shade is pretty difficult when manually moving between rooms, thus causing the overuse of saved places to remove most of the player’s need to act. Most progress is limited behind a single important item. One dark hallway late in the game is way too long to the point of being annoying.

Currently only on Steam, The Longing is a unique but mechanically-troubled game whose idle mechanic will make or break it for many people. Ultimately, a game that played itself while I read a book or made lunch is not going to be the height of enjoyment to many people. Weird discrepancies aside, The Longing is a flawed but otherwise enjoyable game that could have spent a little more time in the adventure game kiln.