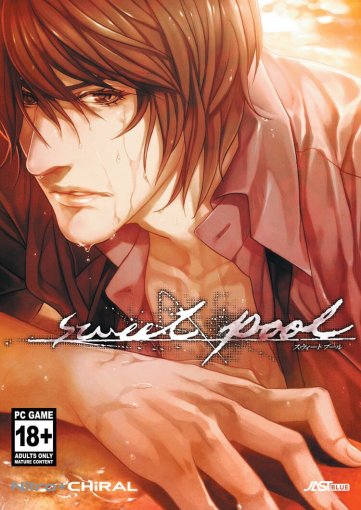 This review contains both extensive discussion on the topic of sexual assault as it relates to both plot progression, character interaction and an untypical increase in profanity for this writer. If such topics are considered unpleasant, please consider sitting this one out, dear reader.

I have a love/hate relationship with visual novels, and while I have a ton of games I like, visual novels as a whole can leave me lacking. Visual novels as a medium have this cool way of letting the player reside inside the characters’ heads and shared experiences. But they often feel narratively padded or suffer, as I like to call it, Otome game cover boy syndrome, a pushed canon relationship. In other words, any visual novel with a dating factor really has a steep hill to climb with me. That hill is even steeper when it comes to the relationships in Nitro+chiral’s Sweet Pool.

High school second year Youji Sakiyama has spent years in and out of the hospital. He doesn’t eat much, has a sleep problem, and if it wasn’t for the fact that all the character designs make every character marble white, Youji’s also looking awfully pale. Plot summaries in visual novel reviews feel like giving boss tips in the middle of a review of a character-action game, so I will keep it brief with things aren’t going great for Youji in his super Christian Japanese high school besides is failing health. Youji’s currently lives alone in an apartment he use to share with his adult sister, because his parents are dead because plot. This provides appeal alone/kidnap time with Youji’s lovely classmates/love interests: wholesome hungry boy Makoto Mita, quite to a genuinely annoying fault Tetsuo Shironuma, and beer can licker and shit head son of a Yakuza Zenya Okinaga. What fun merriment will befall these boys? 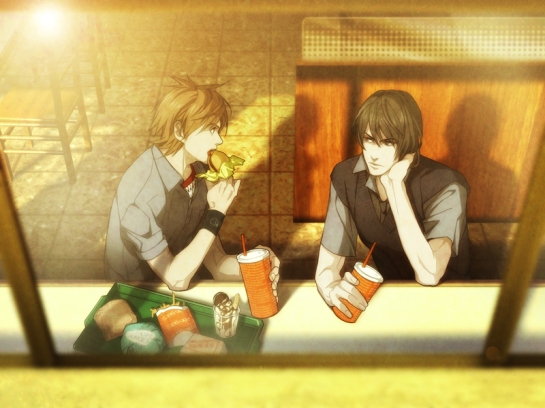 Really strange how this game got the license to play Duran Duran’s Hungry like the Wolf just for this burger shop scene.

I consider Sweet Pool to be Song of Saya’s sleepy younger brother, because of its Nitro+ connection and the shared usage of horrible sex monsters and/or demons. Sweet Pool was infamous for a while because it was known as the meat shitting boy’s love game. I made sure to play the unedited “includes fucking” dudes-being-rude version, and these are my hot takes. While I have only played a few visual novels where the sex is a selling point (I am more an Otome game sort of guy), it always feels like the scenarios are written first and the sex scenes are added later once the script is finished. It reminds me of this film concept from decades ago where old horror movies were rereleased in Europe, such as the 70’s Italian horror film Nude for Satan, in a international version where a sex scene would be added in at random. In Nude for Satan, about half way through the film, there is a hard-core sex scene between two actors who only show up in this scene.

Not to bog the point, but the boy’s love trapping of Sweet Pool, where sexual assault is placed on the same level as getting beat up by the local high school pompadour delinquents for allowance, is hard to ignore. This means that none of the relationships feel warm and often come off as Stockholm-y. I have a strict policy about visual novel bad endings. I feel it necessary to judge a character by their possible actions in a bad ending. For instance, if my sweet summer child Makoto is made into a rapist to execute a bad ending, that is a demerit. I have to now play the other endings knowing full well that Makoto’s otherwise burger-and-fries filled naivety is capable of this horror. It is a hurdle that makes or breaks a player’s attachment to both the seriousness of the plot and the integrity of the characters. Bad endings also work as romantic endings in Sweet Pool. Similar to the cartoonish fashion that kids’ choose your own adventure books visual novels emulate, a romantic ending closes with Youji’s demise.

Easily the best CG in the game. Real “desktop background of a chill 17 year old” vibe going on.

By this point, it appears I hate Sweet Pool. I actually thought most of Sweet Pool was rather awesome. That Song of Saya comparison is appropriate because it feels like it strives for a similar weird bent. Sweet Pool keeps it’s approach to gnarly like it does its color pallet: rather muted. Youji’s rainy grey and evening sun amber world makes playing feel mellow and muted. Song of Saya is a meat world, but Sweet Pool keeps its demon-shitting-meat aspects oddly subtle and reserved. The music is this mix of Silent Hill trip-hop with that guttural bass rock Song of Saya would incorporate. It has an off-beat drum beat that none of the characters really ever grasp, besides Zenya.

Zenya, this Goro Majima from the Yakuza games and Kakihara from Ichi the Killer motherfucker, is easily the best part of the game. Since most of the high school stuff did not click with me, I got really into Zenya’s segments. Sweet Pool is actually written in first person, which is unusual for a visual novel, so I did not have to stick with Youji the entire time. Zenya’s relationship with his former yakuza boss-turned-demon cult leader are really interesting. Zenya seems to get what kind of messed up world he’s in. Sweet Pool’s pacing has a problem with starting and stopping, but Zenya is always engaged with some fucked exploit or scheme.

I really should not have to caption this.

The third corner of this family’s triangle, yakuza muscle-turned-caregiver Kouhei Kitani, is the reason to play Sweet Pool. The meat shitting meme covers up how probably a fourth of this game involves following suave Kouhei around, sipping alcoholic drinks at the Cerulean Warbler bar, being worried about how his makeshift family is quickly going mad around him. Kouhei adds this down-to-earth adult figure to the narrative that stands apart from Youji’s downward spiral.

You know you have reached adulthood when you gravitate towards the adults in a cast of high schoolers. Like how I would rather date the moms in a Harvest Moon/Rune Factory instead of their barely adult kids.

Pros: More interesting and emotional than the shitpost-y premise would lead one to believe. Feels and sounds like Song of Saya lite, which means weird art people can enjoy it beyond the sexual content. Zenya and Kouhei segments of the game are unexpected but easily the most well-realized and underrepresented part of the game.

Cons: Romance feels awkward, especially with canon romance option Tetsuo wherein the route spins its wheels during the last third. Bad endings replace full character routes, which leaves some character underdeveloped. Likes to devote entire scenes to dangling the possibility that Youji’s questions will be answered, whereby the fourth or fifth time it feels like the game is deliberately mocking the player. Presence of sexual assault can be a deal breaker.

I addressed earlier that I played the uncensored version of Sweet Pool, specifically the limited edition JAST USA put out. Here is where my recommendation gets muddy. One of the game’s endings plays this really amazing light and poppy but warm song called Miracles May. Somewhere, maybe in that Sweet Pool Vita port Japan got years ago that removed the sex, is a game that feels like it earns this somber song. To keep returning to movies, Sweet Pool is like watching an 80’s movie that you could instantly recommend if it wasn’t really homophobic in two scenes. Still, I am not reviewing that potentially magical Vita port and I did not figure out how the sex scenes play out on the edited version currently on Steam. My fear is that it would be like an edited sex scene from say Cho Dengeki Stryker, where the sex happens off camera but the characters are all present like the sex happened. Bottom line, a rape-free version of Sweet Pool would be an instant recommendation, but that caveat still stands. Ironically, the shitting meat monsters aren’t the unappealing grotesqueness that someone would have to overcome to enjoy Sweet Pool.