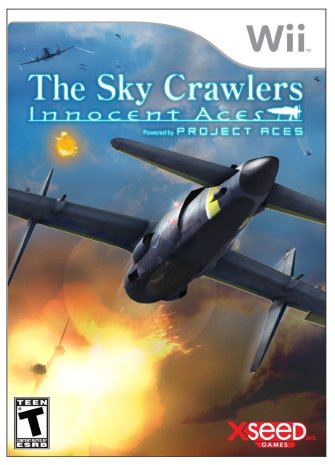 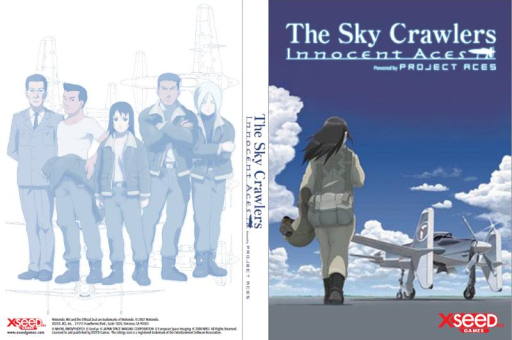 In an alternate history world combat is waged over a strange 30’s era Europe, wherein pilots dog fight over countries like Germany and France, but oddly all the locations have Japanese sounding names like a lamp lite city is called Ubasama or ocean coasts are called Rudakai or mountain valleys are called Baruka. If anyone of you knows the most basic parts of the Team Fortress 2 extended universe lore about a corporate funded war between the brothers Redmond and Blutarch Mann, extensively the same thing is happening with Innocent Aces’ Rostock and Lautern companies. Europe is at peace, but constant military combat is waged between Rostock and Lautern to keep the populace entertained.

You play Lynx (latter renamed Cheetah), an ace pilot serving in Rostock’s prized Cougar Squad. But instead of Sky Crawler’s icon cloned teen soldiers known as Kildren, I was personally shocked to see that Cougar Squad was not full with naive and blank faced fifteen year olds, but bearded men at least into their thirties. See, Innocent Aces puts Lynx into the fray just as the military transitions from employing mercenaries like Lynx’s friend Kaida, to later filling Cougar Squad’s ranks with the expendable cloned Kildren. 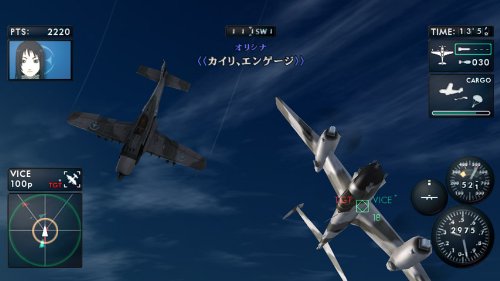 Even after beating the game, I still have no clue what that indicator in the bottom right corner means. One is elevation, the other is speed, but that third one could be a measure of my bad ass piloting skills for all I know.

The game is broken up into missions, where you customize and pilot planes like the quick Sanka Mark II and the stable Suiga by controlling the plane’s movement and stability with the Wii nun-chuk and accelerator speed and brake with the Wii remote. Keeping your craft from falling out of the sky takes some time to get used to, but it only took me a few missions to prefect now crashing into an open field. Missions range from shooting down all designated Lautern vehicles, to defending a military base, to even light levels of reconnaissance like photographing enemy power planets. Combat involves alternating between your basic plane mounted turrets to secondary weapons including napalm and rockets. The biggest tool in your cockpit and where Innocent Aces flashes its plume is the ability to pull off the Tactical Maneuver Commands. Shortened to TMCs, this ability allows you to pull off gorgeous dives and spins to masterfully haunt behind an enemy plane to easily send them crashing back to Earth.

In keeping with my TMC gushing, Innocent Aces’ biggest strength is getting you to feel like an accomplished pilot. While the TMC’s tend to make air combat almost too easy early on like Lynx’s the Bobby Fisher of flying, ground combat is where the real nail biting happens. As you go through the campaign and Lynx successfully ties some “mission accomplished” ribbons under Cougar Squad’s name (even getting the chance to dare-devil a dog fight over a large city with watchful occupants) you already feel like airborne combat is just your place to show off. No, ground combat is where you really get to test the control of your plane and feel some pressure, as my best moments were of sweeping low to drop bombs on a ship. A razor thin line where I often just barely missed colliding with the ship’s main tower, knowing full well that crashing meant restarting the mission over from scratch. 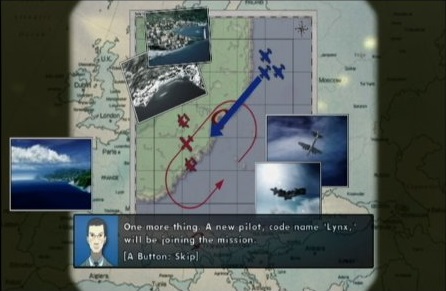 Commander Kayaba gets replaced with this boorish brute of a commander later in the game, and wow, you instantly start to miss Kayaba’s soft manager of a sales division voice.

Even though Innocent Aces makes you feel like a fantastic pilot through both its controls and even simple compliments from your higher ups and other members of Cougar Squad, events and elements in the story often don’t mesh outside your cockpit windows.

A fantastic example is of the dreaded Mission six. During the last mission, you just come back from losing your captain and a few other pilots in combat and Lynx is now in charge of Cougar Squad. Now the Kildren have already been introduced into Cougar Squad’s ranks by this point, where their first taste of combat took the life of two of them. But one cut-scene and a single mission later, the two Kildren are back, fresh and new with different identities. Mission six entails piloting and photographing some Lautern power plants with the slow plane known as the Senryu. Afterwards, Cougar Squad is ambushed and as new captain, you are expected to keep your fellow pilots alive (something never expected of you after this single mission). Since the mercenaries are veterans who don’t really need my help, the threat of failing the mission hovers over my head is more for keeping the Kildren in the air. So I need to keep alive a bunch of kids who died and were returned to combat as recently as the last mission, in a plane that might as well be the APC from Advance Wars but with wings. 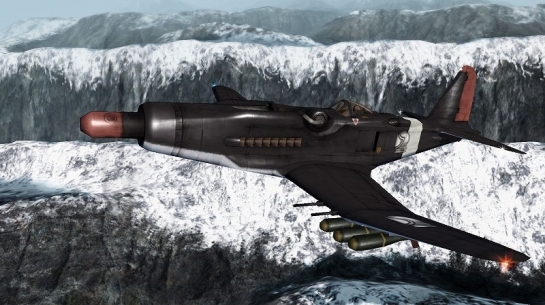 Here we have the glorious Skyly D, meant for only the most capable of pilots.

Innocent Ace’s even struggles to keep Lautern a feasible threat. In the later parts of the campaign after Rostock crushes Lautern at all fronts, your obviously evil deputy chief feels that letting Cougar Squad run roughshod over a losing Lautern wouldn’t be good for business. Since Rostock and Lautern are fighting an effectively equal war for the sake of profit, your deputy chief defects with some of your Kildren platoon so as to return balance. Interesting maybe, but it’s hard to continue mustering a conviction as to why you are fighting Lautern. To keep the Advance Wars comparisons coming, Lautern are nothing like Advance War’s infamous Black Hole army, as their goals are nowhere near as threatening as using space age technology and thick black leather to destroy the world. You are no longer fighting this faceless corporate machine, but your fellow squad mates.

Pros: An interesting perspective with the transition from mercenary fighter pilot to the near replaceable Kildren clones. Getting to retool and even repaint distinct planes is made even better by being actually fun to fly. Some distinctly good music tracks, including a final boss theme that sounds like someone got a classical opera to perform with a heavy-rock band. Characters that can grow on you, like just enthralled to be up in the air pilot Orishina.

Cons: Game makes you (Lynx/Cheetah) out as this star ace at the expense of everyone either adoring or becoming jealous of you, where in the praise seems wasted when you later end up without much of a platoon. Creates confusion when characters are associated with their code names instead of their actual names during mission, but their indicator still reads their Japanese names (rescue Mayfly? Is Mayfly, Watari or Hiroto?). Various jumps in difficulty and quick deaths come as a surprise, and while you feel justified much of the time, there are still other deaths that felt cheap and out of your control. Cougar Squad dialog restarts every time you die, so I often found myself relistening to the same banter five to six times before I beat a hard level.

The Sky Crawlers: Innocent Aces is that rare game where even though I can make a laundry list out of nitpicks and hang-ups, I still feel the core gameplay and added elements make up for it. Chalk it up to Innocent Aces actually giving me a lot to chew on, but with all its’ story vs. gameplay inconsistencies and difficulty foibles, Innocent Aces is worth a visit. Added plus, X-Seed’s release is often under twenty dollars, so I say go buy it.