Edutainment games are a staple of childhood, now turned into interesting relics of early PC software. There exist two camps for edutainment: narrative-driven adventure games that are extensively point-n-clicks for kids, games like Spy Fox and Putt-Putt, and capital E games like Math Blasters, and that one where a rabbit teaches phonics (no, not that one, no, the other one). As an adult, revisiting series like Spy Fox and Putt-Putt (“don’t you forget Pajama Sam” you say with a clenched fist) was great because, like revisiting an episode of The Simpsons you only watched as a kid, I got more of the references. For instance, there is a movie theater that shows fish themed film parodies in Freddie Fish 2, where as an adult I recognized Flash Gordon and Charlie Chaplin’s The Tramp. It was an actually rewarding use of my time. But these were games I played over and over again because I personally had them, unlike the phantom nightmare The Secret Island of Dr. Quandary.

My entire experience with this game involved watching someone else play it badly after school, so for years, I could not remember its name. I have a similar failed memory with an arcade fighting game that I played once at a long-since closed CiCi’s Pizza. I want to say it was Fighting Vipers, but I’m not sure. Developed by now-gone developer MECC, known for classroom staple Number Munchers, The Secret Island of Dr. Quandary is a trip. 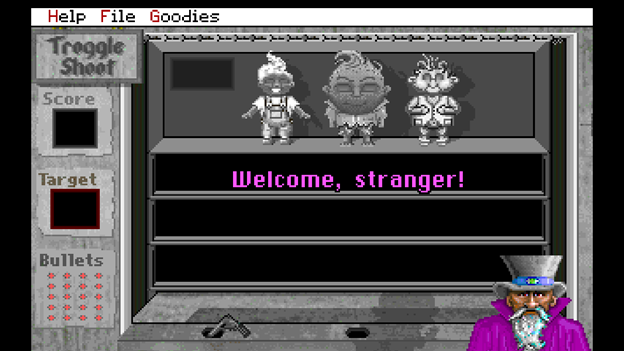 I’m just imagining a child skipping the text and ending up playing the game on d. feecult by mistake.